The past, present and future of Conway sports were celebrated Feb. 6 with the 11th Conway Athletic Awards Commission banquet at Central Baptist College’s Mabee Student Center.

The luncheon, the brainchild of David Grimes, celebrated the 2010 winners of four categories of awards. 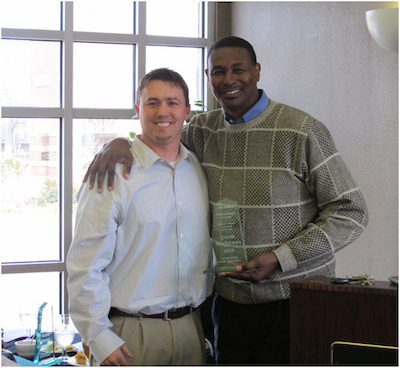 Former University of Central Arkansas football coach Harold Horton, who led the Bears to NAIA national championships in 1984 and ’85, among a slew of other achievements, earned the Elijah Pitts Award, presented annually to a Conway sportsperson for career athletic achievement.

The late Bob Meriwether was honored with the Joe B. McGee Award, presented periodically for meritorious service to Conway athletics.

Jason Anderson, who led Central Baptist College to its first national championship in any sport last year, directing the Lady Mustangs to a 52-1 season; and Christina Byler, a Hendrix College athlete who became the school’s all-time rebounding leader just a day earlier, earned the Marvin Delph Award, given annually to the Conway sportsman and sportswoman of the year.

The Marvin Delph Student-Athlete awards, given to a pair of eighth graders from each of the city’s public and private schools, as selected by the schools, went to Mattie Schanandore and Grant Ellis of Bob Courtway Middle School; Kianna Speight and Javonte Ellis of Carl Stuart Middle School; Morgan Felts and Dylan Schrekenhofer of St. Joseph and Carly Powell and Casey Roark of Conway Christian.

Horton’s resume reflects career achievement. A native of DeWitt, he played on three Southwest Conference championship teams and in the Gator, Cotton and Sugar Bowls at the University of Arkansas. After coaching three years each at Bald Knob and Forrest City high schools, Horton returned to his alma mater as an assistant coach from 1968-80 before being hired at UCA in 1982.

In his acceptance speech, Horton said he shared the award with many others. He started with the late Dr. Jeff Farris, the UCA president, as well as the board of trustees who hired him.

“They gave me the opportunity to be a head coach,” he said.

Next up were the athletic directors he worked under, Bill Stephens and the late Rex Lovell.

He mentioned the coaches who worked with him, including Ronnie Kerr, Bill Keopple, Mike Isom, Richard Martin and a host of graduate assistants. Isom, who succeeded him after he returned to the UA, drew special praise.

“There could not have been a better staff member to me and to UCA than Mike Isom,” Horton said. “The respect, the hard work and integrity he brought to our program was something.

He mentioned two of his players who were in attendance: Scott Schwartz and Chris Riggins.

Horton recalled growing up on a farm in DeWitt, driving a tractor and plowing fields.

“There was a lot of time to daydream, and I did,” he said. “My career as an athlete and coach went beyond any dream. I give credit to all the people I’ve mentioned, my family and my God. The lessons you learn from athletics are lessons that will always be with you as you continue in your chosen profession. Athletics is definitely a big part of our total education. It teaches the lessons of life."

Horton’s son, Tim, an assistant coach at the UA, joined him at the banquet.

“You, the people of Conway, you’ve helped make my career a glorious experience,” Horton continued. “Even though I played on championship teams at the University of Arkansas, none of those experiences was any better than what I had with you people. Receiving any award is really appreciated and shared with so many.”

In three seasons as CBC’s softball coach, Anderson has built a career record of 116-23 (.835 winning percentage). He led his first CBC team to a 29-9 record and an appearance in the National Christian College Athletic Association national tournament. His 2009 team finished 35-13 and third in the national tournament. In 2010 the Lady Mustangs won the only national softball title in Arkansas history and CBC’s first national title in any sport.

Anderson recalled how he told his Lady Mustangs just before the 2010 season opener that they had an opportunity to have a season they’d never forget. His words were prophetic.

He thanked the CBC administration, his wife, his assistant coaches and team as well as “my lord and savior Jesus Christ.”

“He’s doing some awesome things around here,” Anderson said. “He has fixed His gaze upon CBC, and I’m very blessed to be a part of it.”

Byler earned first-team all-Southern Collegiate Athletic Conference honors in softball and basketball in 2010 and led the SCAC in basketball scoring with 17.3 points per game. She was among the top 10 in NCAA free-throw percentage at 90.2 percent and toured Brazil as a member of the USA D-3 Basketball All-Star team.

“This award has my name on it, but it’s a testament to what we were able to accomplish, overcoming several years of adversity,” she said, referring to the 20-5 mark the Warriors put up last season.

Meriwether, a Paragould native, graduated from Hendrix College, where he lettered for three years in basketball. He was on the Hendrix faculty from 1959-93, teaching education, political science and American history, and served as dean of students. He was a volunteer scorekeeper for Warrior basketball for 34 years and was selected to Hendrix’s Sports Hall ofHonor in 2004.

Will Meriwether spoke for his father, who died in 2010, recalling how as a young child, he thought his father “had the power to stop the game,” since the officials consulted with Bob Meriwether so often at the scorer’s table.

Previously honored with the Joe B. McGee Award were Bill Johnson and Jim Schneider.