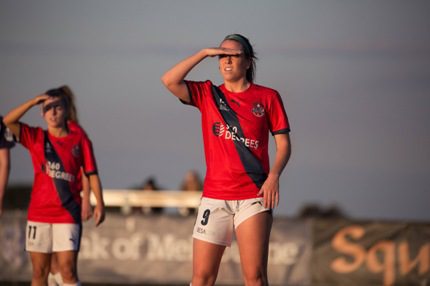 Following a collegiate career that saw her serve as an anchor for a Central Arkansas women’s soccer program on the rise, former Bear Allie Coleman is continuing her soccer career at the professional level, playing for Alamein FC in Australia’s Women’s National Premier League.


Coleman, who finished her UCA career with five goals and five assists, is tied for second in program history with 75 matches played and sits third with 5,383 minutes played. She earned All-Southland Conference Honorable Mention in 2015, and helped lead the Bears to a 10-0-1 record in Southland Conference play in 2016.


“Maddi Poteet was a senior when I was a freshman at UCA, and she spent some time in Australia after she graduated, so Coach Derek [Nichols] mentioned that I could reach out to her to see if she had any contacts,” said Coleman about how the opportunity to play for Alamein presented itself. “She helped me out tremendously by sending me a lot of coaches’ numbers, so I sent my highlight video and Alamein just fell into place.”


Coleman credits her time at Central Arkansas with preparing her for the next step of her career, saying, “Playing at the Division I level at UCA prepared me by giving me the work ethic and discipline that it takes to take my career further. Practicing and working out during the spring of my senior year allowed me to keep in shape and continue to work on my positioning and touches on the ball.”


Coleman highlighted the differences between the college and professional levels, saying, “I feel like playing at the professional level is much more pressure. Being one of two Americans on the team puts the spotlight on us, as far as people expecting us to show up and perform at a very high level off the bat.”


Alamein FC, which is located in Victoria, Australia, is one of eight teams that play in the WNPL. AFC currently sits fourth in the league table with a record of 8-3-3 after 14 matches played.


Asked what her most memorable moment so far has been, Coleman mentioned two, saying, “Starting and playing the whole 90 minutes when I had been here only two weeks was memorable. It was nerve-wracking playing in a new system with a new team when I hadn’t gotten the hang of how this team plays yet. At the end of the day though, soccer is soccer in whatever country you’re in! Although seeing a kangaroo up close for the first time is a close second!”


Central Arkansas head coach Jeremy Bishop commended Coleman on making the next step in her career, saying, “We are so proud of Allie! She has worked so hard for this opportunity and I know she will make the most of it. Her soccer ability, strong will and work ethic will allow her to play at the next level for a long time. Allie had a great career her at UCA, she had a huge impact on our program, and she was a big part of our success. We will miss her big time this fall.”


Bishop continued, saying, “It’s great for our program to have players going on and playing at the next level after college. We are getting more and more that have that goal when they come into our program and for them to be able to reach that goal will continue to open more doors for our future players and also help us in recruiting young athletes that have the same goals.”