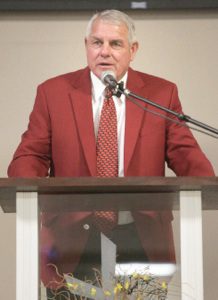 Tickets are on sale for the 14th Annual Beast Feast scheduled Saturday, Feb. 7, at the Conway Expo Center and Fairgrounds. The expo begins at 1 p.m. with the program at 5 o’clock. Special guests are Ken Hatfield and Preservation Theory.

Beast Feast is the annual Sportsman Banquet hosted by the Second Baptist Men’s Ministry in Conway. It is held each winter and is open to men and boys of all ages and is a night filled with games, entertainment, prizes, live music, great food and great speakers.


Ken Hatfield is a graduate of the University of Arkansas, where he starred at defensive back for the 1964 team that won a share of the national championship. Among his teammates were such pro football luminaries as Jimmy Johnson and Jerry Jones.


In his tenure as head coach of the Arkansas Razorbacks, he compiled a 55-17-1 record from 1984 to 1989. His teams won two straight Southwest Conference titles in 1988 and 1989, a feat that the Razorbacks had not accomplished since his playing days. In 1989, Ken became the first former player to coach his alma mater in the Cotton Bowl Classic. Arkansas’s Southwest Conference championship that season is the program’s last conference title to date.


One of the few remaining proponents of the conservative triple-option offense in college football, Ken compiled a 168-140-4 record in his career as a head coach.


The band Preservation Theory has a strong desire to put God first above all things. As musicians, PT has a desire to lead people in worship and to make themselves available for anyone who might need a worship band. They do not charge for appearances. This means that the smallest church with no budget can have them play an event for nothing. PT wants to be a ministry that goes where God calls them. If that happens to be a youth group of 10, they are happy to be serving the Savior in any way they are able. 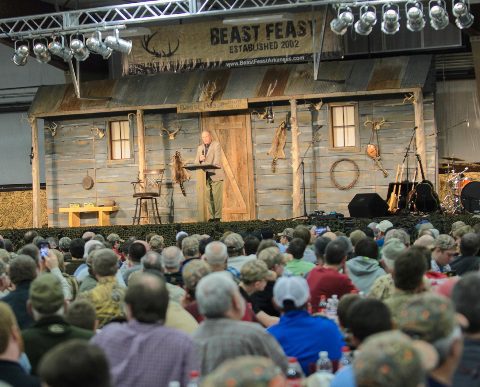 Those attending are asked to bring non-perishable food items to Beast Feast. All food is donated to local food pantries to help those in need. As a bonus, there will be an entry into a special prize drawing for EVERY item donated. Last year, organizers collected more than 300 cases of food.


Tickets may be purchased online or at the Second Baptist Church office. For more information, visit beastfeastarkansas.com or call 501.327.6565.