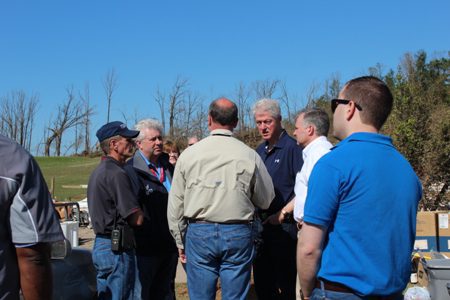 A violent tornado was tracked 41 miles through Mayflower and Vilonia on April 27 before dissipating near El Paso (White County). The tornado was given a rating of EF4 (166-200 mph winds). Other smaller tornadoes were spawned by the same storm and tracked through White, Jackson and Independence counties.


There were 16 fatalities reported (12 in Faulkner County, three in Pulaski County and one in White County), making it the deadliest single tornado in Arkansas since the Jonesboro twister (rated EF4) of May 15, 1968 (35 fatalities), according to the National Weather Service. Along the way, houses and businesses were heavily damaged or reduced to rubble, with an estimated 400 to 500 homes destroyed.

President Obama is expected in Arkansas this week to tour tornado-ravaged areas. He has declared a Major Disaster for Arkansas, Mississippi and Alabama, making federal funding available to affected individuals in counties severely damaged by the recent severe weather.


Johnson reiterated Homeland Security’s continued support of state and local recovery efforts throughout the region. “I want to thank the first responders, volunteers, and others in this community who are still supporting the response and recovery efforts,” said Johnson. “FEMA has more than 160 staff on the ground in Arkansas to support response efforts, and we will work closely with the governor, mayors and other officials to ensure you receive the support you need and recover from this terrible storm.”


In advance of the severe weather April 27, FEMA deployed an Incident Management Assistance Team to Arkansas, and within hours of the storm the Texas Task Force 1 Urban Search and Rescue Team (US&R) was deployed to the region. Currently, more than 240 FEMA staff are on the ground in Arkansas and Mississippi, there are five locations for survivors to register for assistance and four Disaster Survivor Assistance teams are meeting with survivors and traveling door-to-door in the impacted communities in Arkansas and Mississippi — helping individuals register for federal assistance.


Individuals and business owners who sustained losses in the affected region can begin the disaster application process by visiting DisasterAssistance.gov, by registering via web enabled mobile device at m.fema.gov or by calling 1.800.621.FEMA (3362). Online registration is available 24 hours a day, seven days a week. For more information, visit dhs.gov or fema.gov.