By Sonja J. Keith
When Conway students head back to Sallie Cone Elementary School in the weeks ahead, they will have a beautiful and fun counselor’s office to enjoy. 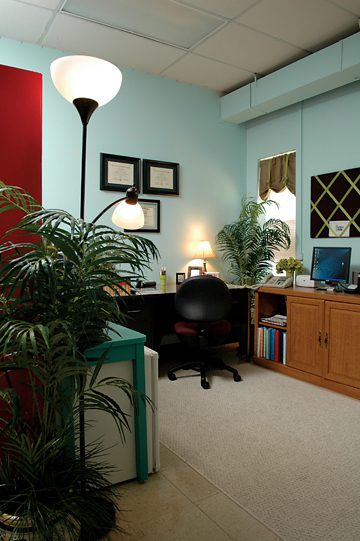 As part of a class taught by instructor Jennifer Whitehead, interior design students at the University of Central Arkansas worked with school counselor Sherry Haywood to create a space that both faculty and young people love.
Students assigned to the office were Cathy Long, Angie Young, Courtney Utley, Melissa Christy and Christi Lewis. Two students – Cathy and Courtney – volunteered to implement the design and finished up after the semester ended.
Utilizing a Dr. Seuss theme, the students created a “very student-friendly” design that utilized existing furnishings – plus a donated loveseat – with an updated look and bright colors. The paint for the project was donated by KWAL Paint in west Little Rock. The new tile countertops were installed by Cathy.
The plan included a large mural on one wall to serve as the focal point for the space, which Cathy and Courtney admit took the longest to create but is their favorite aspect of the room. The students also painted a picture frame on the opposite wall to highlight some of the counselor’s personal items.
School principal DeLanna Lacy noted that the counselor used her own personal resources for the project. “She invested a lot of her own time and money into this,” she said.
“It is so worth it,” Mrs. Haywood added.
Sallie Cone students were able to see the mural the last week of school. Mrs. Haywood noted that it is already having a positive effect on students, and cited an instance where two boys were so interested in the mural that it prompted a conversation about what the picture contained instead of behavior problems that have occurred in the past.
“I love it,” Mrs. Haywood said. “The girls have been wonderful. It’s just been so much fun.”