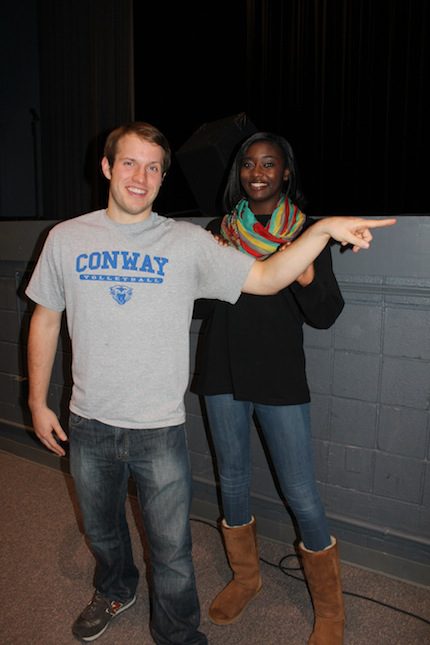 08 Apr CHS to present 'Beauty and the Beast'


Conway High School students will perform a musical rendition of Disney’s “Beauty and the Beast” from Thursday, April 25, through Saturday, April 27, at James H. Clark Auditorium. Admission is $5 for adults and $3 for students.

“This show is a culmination of all the arts,” said A.J. Spiridigliozzi, play director. “There’s something really special about people from many different walks of life who all come together to create an event that can effect an audience.”


Auditions for the production began in January and rehearsals followed shortly after. The production includes 65 actors, more than 50 students with backstage positions and a 25-student orchestra. The musical will follow the same storyline as the Disney classic: a man-turned-beast by a magic spell must find true love with a woman who disregards his appearance before the spell is made permanent.


Spiridigliozzi says the musical will feature some songs in the musical that were not in the famed movie. “We wanted to do a show that people could connect with and one that families could bring their children to,” he said. “We really want a show that can appeal to people in the community of all ages.”


Spiridigliozzi said directing the production was both challenging and enjoyable and noted that the students are working hard to produce a quality play that the audience is sure to enjoy.


“Directing these students is a blast,” Spiridigliozzi said. “I get to know my own students better and I get to know students who I never would have had the pleasure of meeting. We work so hard during rehearsals and still manage to laugh and have a great time.”


Spiridigliozzi hopes that everyone in the audience understands the underlying theme of accepting one another regardless of appearance. He urges everyone in the Conway community to come out to attend the play, especially on opening night.


“I hope the audience will be touched by the skill level and passion shown by the students on stage,” Spiridigliozzi said. “Seeing all the progress made on opening night will make the entire process of play production worthwhile.”