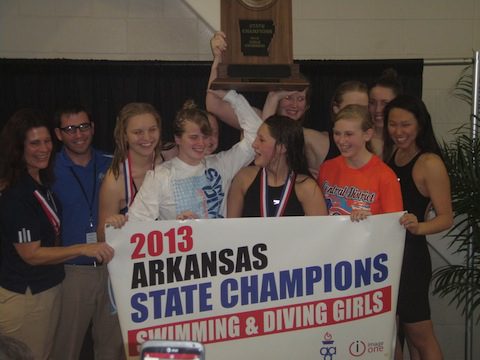 The Conway High School Girls Swim Team broke a Bentonville streak on Saturday to claim the state title that was 25 years in the making.


The CHS boys team was fourth in the state competition.

“We did a wonderful job this year at state,” said Christie Rye, head high school swim coach. “We had three state records broken by Conway swimmers.”


The Conway girls set the tone for the meet by winning the opening medley relay. Corissa Calico, Jocelyn Woo, Annie Courtway and Amanda Crnic led start to finish with a time of 1:52.1. “We had many best times, which made the day flawless,” said Rye.


To start the Individual events was Sophomore Laura Bloomfield started the individual events, seeded 13th in the 200 free. She finished fifth with a time of 2:03.95, and sophomore Amanda Crnic was ninth.


In the 100 fly, Woo picked up her third gold medal with a time of 57.89, Calico placed second, senior Annie Courtway was in sixth place and Carly Ebinger was 15th – all with their best times. Ragsdale placed fourth in the 100 free with 56.87.


“In the 500 we had Laura Bloomfield placing third, dropping 17.19 seconds off her seed time.” Crnic was fifth, and Karis Martin was 16th.


The next race was the 100 back where Calico placed second.


“At this point the girls were ahead with 20 points, and for us to win we just had to have a flawless 400 relay. Amanda Crnic, Laura Bloomfield, Casey Ragsdale and Annie Courtway did their job perfectly, coming in second with a time of 3:48.06. What an exciting finish to the day. Conway won by 14 points.”


“The boy’s also did an awesome job at state, placing fourth,” Rye said.


In the boys 200 free relay, Hayden Lemons, William Bryden, Isaac Powers and Crosson were just off the state record with a winning time of 1:29.37.