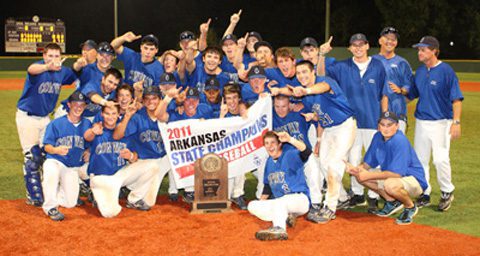 
Although they have nine seniors on the roster, Conway’s baseball Wampus Cats are inexperienced as they begin defense of their Class 7A state championship.

Conway won the second state baseball title in school history last year, 22 years after the first one, by knocking off Bryant, the 2010 state champion, 12-3.


“We’ve got some really good kids returning who haven’t been in the fire because we graduated 10 guys who kind of carried the load,” said Noel Boucher, the only head coach in the history of Conway baseball. “The first part of the year will be letting those guys get their feet wet and developing leadership.


“Early, it might be a little testy, but we think these guys will find their niche and we’ll be OK.”


“They’re old enough and they have decent skills, but they’ve always had someone playing ahead of them,” Boucher said. “We have only four juniors, so I’ve got inexperienced seniors and sophomores, but I think we’ll be OK, although it may be frustrating early.”


The Wampus Cats graduated all of their pitching last year, including Connor McClain, who was named MVP of the state tournament. But Boucher said he would build around a rotation of four senior outfielders as well as seniors at shortstop, third base, first base and catcher.


“We’ll see how it goes,” he said. “They’ll either get it done or they won’t. All the seniors will get a chance to play. If they fall through, the next gig will be sophomores.”


Conway, which won its opener last week against Greenbrier, will play in a tournament in Bentonville this weekend.


Boucher said Little Rock Catholic and Bryant returned several players off last year’s teams and should be among the favorites in the conference race.

But as the Wampus Cats proved last year, the conference race is just another step toward the ultimate prize.