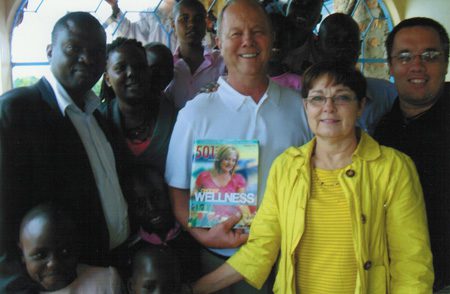 
The Chicken Dance Marathon continues — and is growing.


The brainchild of Dr. Mark Cooper, professor of early childhood and special education at the University of Central Arkansas, the event raises money for the Kipsongo slum in Kitale, Kenya. But it does much more as it focuses on awareness of service learning opportunities for schoolchildren and their partnerships with businesses, corporations, churches and anyone else who wants to get involved in the project.


In three years, the Chicken Dance Marathon has raised $35,000 for various Kitale charities, including the Seeds Children’s Home Orphanage, the Bread of Life Feeding Center and the Seeds Academy. A construction team from Arkansas, Florida and Kenya built a chicken coop, which has been filled with about 2,000 chickens, whose eggs have been of a source of revenue and food for the slum.


And yes, the marathon includes children and adults strutting their stuff to everyone’s favorite “Chicken Dance.”


Linda Cooper, Mark’s wife and co-founder with her husband of the Chicks for Children Foundation, and Dr. Larry Pillow, a member of the foundation’s board of directors, went to Kenya in the fall to help develop project partners. Their son, Jim Cooper, is a missionary in Kitale, working with Pastor Richard and Hellen Makani.


“We’re trying to identify a variety of projects within the Makanis’ mission operation as well as projects that might pertain to other needs within that region,” Mark Cooper said. “We’re trying to identify what we might be able to do with partners in the state to help sustain support not only for the Makanis’ mission operation but also with others that might also meet the needs of additional groups of people, including orphans, widows and so forth.”


He said the Guy-Perkins Chicken Dance Marathon in October included kindergartners through seniors.


“The high schoolers would begin to create their own dance renditions,” Cooper said. “They would do the ‘Slide’ with the Chicken Dance, giving us some ideas to try to engage the older person due to the dance’s creativity. We can have dance-offs and things like that. We’ve got some ideas emerging.” 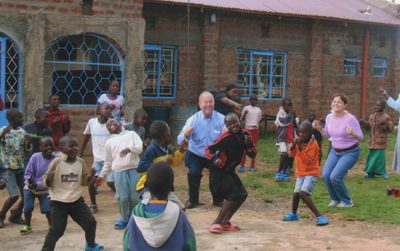 The England School District wants to have another dance marathon, and Cooper said he expects the Conway School District to hold its fourth one in the spring.
But Cooper stresses that the Chicken Dance Marathon is a “culminating, capstone-type activity.”


“We’re wanting to embed that in a service learning educational journey where we talk about why we’re doing what we’re doing, what it means to be service-minded, global and local,” he said. “A whole lot of things go with it.”


As a professor of education, Cooper is passionate about the importance such a project can take for his classes.


“We’re wanting to grow teachers who become increasingly oriented to use service learning as an educational vehicle to teach the Common Core and to teach children to be concerned with meeting local and global needs,” he said. “There is an important educational component.”


Chick-fil-A has come on board as a partner for some of the marathons.


“It’s exciting when we can get their partnership, and over time we hope to start growing partnerships with more Chick-fil-As and other businesses and corporations,” said Cooper, who recently returned from Vail, Colo., where he worked on a partnership with a Vail church.


“Partnerships can include school districts (public and parochial), businesses, churches, corporations,” he said. “This is the way this little mustard seed continues to grow.”


For more information about partnering with Chicks for Children or hosting a Chicken Dance Marathon, contact Cooper at 501.450.3171 or
[email protected] or visit www.chicksforchildren.org.