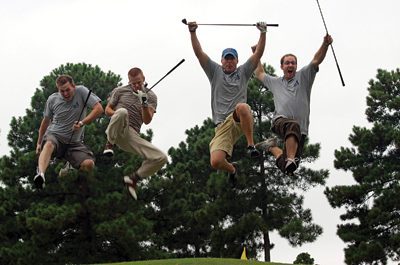 Community Connections is a non-profit organization that helps families address various health, developmental and social needs by offering comprehensive programs and services not currently available in the community. The organization facilitates soccer, football, dance and theater programs in Little Rock and Conway.

“Community Connections is the only organization of its kind in Arkansas,” said City of Faith Program Manager Allen Winkler. “Last year the tournament benefited Bethlehem House of Conway. Every year we’d like to find a different organization to help. For our first year, it went extremely well. We ended up giving away $3,500 to Bethlehem House.”

Winkler, 28, has worked at City of Faith for five years. The organization is federally contracted, and its sole purpose is helping former inmates rehabilitate back into society. City of Faith works with inmates to develop stable work histories, re-establish family ties and become productive members of society.

“But it’s not just enough to show up every day and just help inmates,” Winkler said. “Our main goal is to teach them to give back. Four years ago we started our Christmas project. The first year we had our inmates making gifts and dinners for the elderly in Little Rock. These were people who had no one to care for them on Christmas. It really showed our inmates that they need to care about people because there are people who have it worse than them. It also shows us how to teach the inmates to care for people.

“Plus, I love seeing these tatted up guys playing with glitter and making Christmas cards.”

In addition to the golf tournament and Christmas project, City of Faith also works on an Easter project each year. And beyond the bigger projects, the inmates serve the community daily through smaller coordinated projects.

“Part of my job has developed into working with City Connections out of Little Rock,” said maintenance coordinator Jonny Tyler. “Jeff Spry will call me and say, ‘Hey, I’ve got a lady that needs some stuff moved out of her house,’ and we’ll coordinate that move. That really fills in the core programs that we do. There’s always something to do in the community.

“We have several projects a year. We can’t enforce that our inmates get involved, but we strongly encourage them to give back, whether it be doing odd jobs at someone’s house or mowing people’s yards. We have a 96 percent success rate, meaning that the inmates don’t end up back in jail once we release them.”

City of Faith-Little Rock opened in November 1996, but the concept behind the organization was in existence long before that date.

“About 30 years ago, Kathy Biedneharn was doing her thesis on her master’s degree,” Winkler said. “She was also doing ministry in North Louisiana at the time. She was working in the prisons, giving the Gospel to people. One day, she asked an inmate what she could do for him. He said, ‘Get me a job – that’s how you could help me.’ After that, she wanted to start a facility where inmates could come and rehabilitate back into society.

“Our facility in Little Rock has 106 beds, and we can house 120 inmates. We keep our neighborhood safe from our clientele and help them find jobs, rebuild relationships with their families and set long-term goals for themselves.”

City of Faith has locations in Shreveport and Monroe, La., as well as in Little Rock. The Little Rock branch is led by Maumelle resident Terry Williams.

The FORE!!! Charity Golf Tournament will feature two shotgun starts at 8 a.m. and 1:30 p.m. A putting tournament will be held from 11 a.m. to 1 p.m. All participants will receive swag bags provided by City of Faith.

“The inmates do all the manual labor behind the tournament,” Tyler said. “Whatever we give out to the golfers who participate, the inmates put in the bag. Some of the inmates will come and serve onsite at the tournament with us, and all the money raised is going to Community Connections.

“We really encourage our residents to stop looking at their own problems and look at helping other people.”

Winkler added, “It costs about $30,000 a year to house a federal inmate. With us, they’re getting educational opportunities and opportunities to work. It’s probably the best thing that could happen to some of these inmates. Yes, they’re separated from their families, but they’re working. Some people are much worse off right now.”

Winners of both the morning and afternoon flights will receive trophies and prizes.  There will be a closest to the hole, hole in one and longest drive competitions held during each flight. All participants will also be eligible to receive great door prizes from local sponsors.

For information on how to become a hole sponsor or donate door prizes, visit www.theforecharity.org.
Registration can also be done online. Early registration ends Friday, Aug. 13. The early registration fee is $70/golfer ($80/golfer after Aug. 13) and includes greens fees, cart rental and lunch.