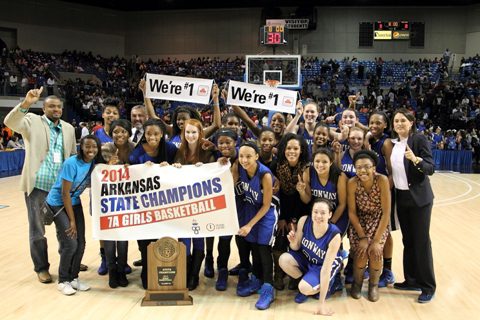 
For the second time in six years and the first time under Ashley Nance, the Conway Lady Wampus Cats brought home a basketball state championship.

The Lady Cats beat the defending champs, Fort Smith Northside, 74-67, in the 7A final March 16 at Summit Arena in Hot Springs.


501 Basketball Team honoree Jordan Danberry was named the MVP of the game, and the Lady Cats pulled out the win with an all-around team performance.

“Jordan Danberry and Alexis Tolefree had a big night for us offensively,” Nance said. “Hailey Estes came off the bench and was a huge spark for us during the second quarter. Asia Willard, Allie Pack and Christin Rogers did some things for us defensively that a lot of people don’t see and they don’t get near enough credit for. Allie, with her size in the paint, changes the game for teams offensively and alters shots. Christin is a force in the paint on the boards and a mismatch for teams defensively with her size.”


The Lady Cats came out of the gates a little flat, which wasn’t too unexpected for a young team on a big stage.


“We started out the game a little slow, but that is common in championship games,” Nance said “At the end of the first quarter it was 9-12, and I can remember telling the girls that as bad as the first quarter was we were only down three, and now we had our legs underneath us. We had an unbelievable second quarter, which sparked a 20-point lead going into the half. Having that kind of momentum going into the half was big for us mentally.”


The big second quarter was too much for Northside to recover from, according to Jim Files, color commentator for Conway Corporation 5 Sports.


“Tolefree hit a 3 for her first points and finished the quarter 4-of-5 from 3-point range,” Files said. “Conway played a perfect second period, and Northside couldn’t recover from the 20-point deficit.”


Reflecting on the season as a whole, Files said it was another win over Northside that really got things going for the Lady Cats.


“The victory over Northside at home, snapping their unbeaten streak in the state, was by far the biggest of the regular season,” Files said. “It was a turning point for the team.”


Nance also pointed to that conference win over Northside as a highlight of the season.


“I think a lot of people don’t realize how long a basketball season is,” Nance said. “Our first practice is the first week of school, we start playing games in early November, we play and practice through Thanksgiving and Christmas and end the season mid-March.


“Once conference season began, we hit a rough couple of weeks as a team. We were struggling getting across the concept of playing together. We lost to Southside and Greenwood at home in the first round of conference play. We had one particular practice that motivated us to play as a team, and we followed by beating Fort Smith Northside, and we won 11 straight games. We took our adversity, and we turned it into something positive.”


With so many underclassmen coming back next season, the Lady Cats could be even better than they were in this championship campaign.


“Conway would’ve been favored to win next year even if they lost, but now the question is who can beat them?” Files said. “Not to mention they get back one of their best players who was injured all season, Kianna Speight. They should be better and more experienced. It looks like a dynasty!”


Nance wants a return trip to Hot Springs most of all for Speight and Micaela Norment.


“We want to be back in Hot Springs for the players that were injured during the season,” Nance said. “We lost Kianna Speight in early October to a knee injury, and then we lost Micaela Norment during the first conference game to a knee injury as well. Both of these young ladies played big roles on our team, on and off the court. We want to see them back playing 100 percent, and they will be a huge part of our motivation.


“We definitely want to take some time to enjoy winning the championship this year. We feel like our team deserves a couple of weeks off. Our plan is to get back to work after spring break.”


This is the Lady Cats’ second championship in the last six years. Nance was also a part of a championship at Conway Christian in 2010, and the Conway Wampus Cats won a basketball championship that same year, too. The Conway community is riding high with a string of recent basketball success.


“There are a lot of people in the community that love the game of basketball, particularly girls basketball,” Nance said. “I think these people play a huge role in the development of our athletes. From city league coaches, seventh-grade coaches, junior high coaches and summer coaches — they all have a vital role. The Conway School District gives us everything that we need to help aid in this process as well. We are lucky to coach our players, but our players are very lucky to have so many people that care and put time and energy into helping make them successful on and off the floor.”


“I think the Boys and Girls Club has had a lot to do with the successes locally, plus the growth of Upward Basketball,” Matthews said. “So many kids start playing basketball at an early age that it grows into a love of the game, and as they feed into the different programs, that translates into wins and growth.”


And with a coach like Nance at the helm — someone who has now won six championships as a player or a coach — success and growth could continue at Conway High.


“I think Coach Nance is one of the, if not the best, young coach in the state,” Matthews said. “She comes from basketball royalty in the state and has been one of the most respected people in the state for a long time. From high school playing days to college playing days and now leading two programs to state titles, she’s as good as it gets, and I hope my daughters get to play for her someday.”