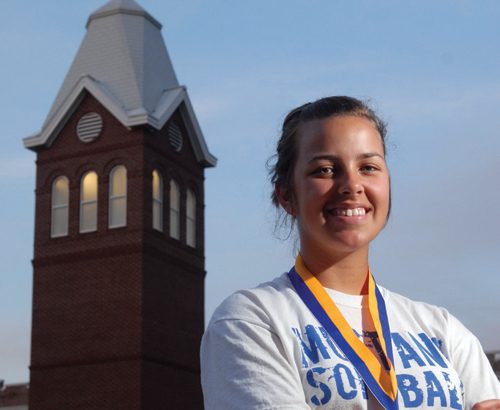 Martin, 19, anchored a potent 52-1 Central Baptist College softball team that won the National Christian College Athletic Association championship in May. Martin was one of four Lady Mustangs named as an All-American. In the regular season, she hit .475 with 20 home runs and 60 RBIs while playing first base.

It was a dream season for Martin and the Lady Mustangs, but now the dream is coming to an end – at least for Martin.

With two years of eligibility remaining, Martin is hanging up her cleats and moving on to the next stage of her life – a career in nursing.

“I would love to do both, but it’s the growing up factor of having to choose,” Martin said. “It was definitely a good season for me to end my career, so that really helps with the closure. As a team and personally, we reached all of our goals. I have no regrets.”

Martin is now a student at UAMS in Little Rock. She’s working on becoming a nurse – a decision that stems from a family tragedy.

In 2006, Martin’s 5-year-old cousin, Brooke Phillips, died after battling cancer for two years. After the death, Martin left her home in Angleton, Texas, to move to El Dorado to live with her aunt and uncle and help her younger cousin – Brooke’s older sister, Taylor – cope with the death.

“Ever since Brooke’s death, I’ve wanted to be a nurse,” Martin said. “That’s where my passion is – helping kids and families that are dealing with cancer. I was there when Brooke passed away. It made me different. That experience really shaped who I am.”

Martin graduated from El Dorado in 2008. She first met CBC softball coach Jason Anderson that summer at the high school all-star game. But that’s not when her CBC journey began. Instead, Martin decided to move a little closer to home, enrolling at Stephen F. Austin University in the fall of 2008.

“I talked to Coach Anderson again in November of 2008, and it was just the right time in my life to make a change,” Martin said. “We talked in a week when I was really struggling, and I really felt peace in talking to him about what CBC could offer. I just went where peace led me.”

And now peace has led her to make one of the toughest decisions of her life. She’s giving up softball in order to focus on her future career. Her aunt and uncle, Jessica and Chaney Phillips, founded BIG Love Cancer Care in honor of Brooke. The non-profit serves Texas Children’s Hospital (where Brooke was diagnosed) and Arkansas Children’s Hospital (where Brooke died). BIG stands for “Brooke’s incredible gift.” For more information on BIG Love Cancer Care, visit www.biglovecancercare.org.

“God has led me to go to nursing school now,” Martin said. “This will allow me to get my foot in the door. I want to work at ACH some day, and I want to be able to help out more with the foundation. I have that empathy and compassion for people dealing with cancer.”

The decision to leave softball behind was a tough one for Martin, but she knows it was the right choice. After her first week of nursing school, she received news that she had been selected to receive a scholarship – the Dean’s Excellence Award for Future Nurse Educators. The scholarship will pay for her tuition, books and fees while

she is at UAMS. It was a final confirmation that she had made the right decision.

“Playing softball was my life – my identity,” Martin said. “But that season of my life has come to an end. The hardest part is losing that identity that I’ve had for 16 years. Now I have to move on into the adult world.”