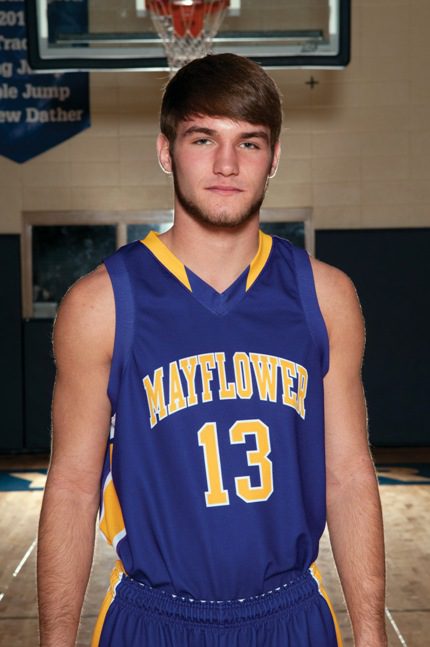 
When his older brother, Bentley, took to the basketball court, a young Bradley Chambliss watched closely. Impressed by the game, Bradley couldn’t wait to take the court himself.

So he didn’t wait.

“I was playing basketball before I could walk,” Chambliss said. “I was like 4 years old, playing at the YMCA in Pine Bluff. That’s where I got my start.”


Chambliss was nominated and selected to the inaugural 501 Basketball Team, which is made up of male and female student-athletes honored for their on- and off-the-court accomplishments and contributions. He was nominated by his coach, Brent Stallings.


“Bradley does the little, but hard things, that help win ballgames,” Stallings said.


When his family moved to Central Arkansas in 2009, Chambliss became a Mayflower Eagle, where he’s experienced his share of great memories on the court.


“Last year, during the regional semifinals, one of my teammates hit a buzzer-beater to beat a team that I consider to be one of our biggest rivals — Episcopal Collegiate,” Chambliss said. “The ending was incredible.”


According to Chambliss, basketball at Mayflower isn’t just about winning; it also includes another important element — family.


Last summer, Chambliss suffered a setback to his athletic goals this season, breaking both bones in his shin while playing football.


“I want to get the team back to where we were last year,” Chambliss said. “But rehabilitating my leg is a priority right now. Just getting to practice and playing has helped me strengthen it. It’s getting better and better every day.”


As his senior season progresses, Chambliss says there’s only one team that he’s itching to get the chance to play against.


“Episcopal Collegiate,” Chambliss said. “At our place last year, we had our student section there, and it was the largest crowd we’ve ever had. We took the whole squad to their place the year before, and it was standing room only. It gets crazy at those games.”


Chambliss and the Eagles will get their first chance at the Wildcats tomorrow night at Episcopal Collegiate, with a second meeting between the teams in February at home.


Aside from basketball, Chambliss also played free safety for the Eagles’ football team and is involved in Beta Club, National Honor Society and FCCLA at Mayflower High School. He is also heavily involved with his leadership group at Lifeline Fellowship Church in Mayflower.


When he’s not devoting time to his school or community, however, Chambliss says his favorite pastime is playing Xbox with his friends.


Chambliss’ plans for the future involve attending college at the University of Arkansas in Fayetteville. And although his travels may take him beyond the 501, Chambliss is sure of one thing.