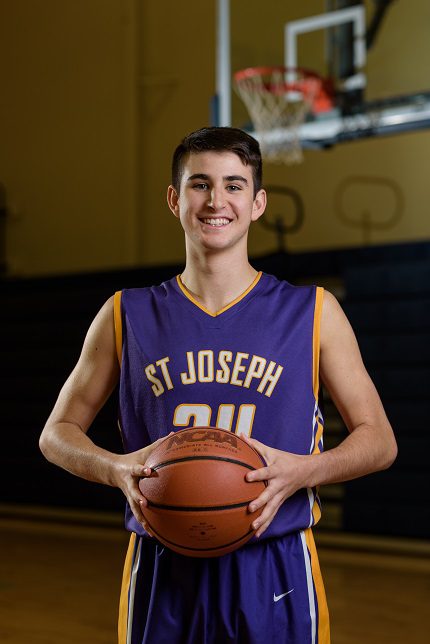 
Pay no attention to St. Joseph’s record right now. While the Bulldogs may be the underdogs of the Class 4-2A conference, there’s still enough bite left in the team to put together a strong finish.


“This season has been a hard fight for us, but it’s slowly coming to us,” senior guard Spencer Pope said. “Coach B’s goal for us right now is to keep getting better. He tells us to forget our record and focus on getting better because at the end of the season, all that matters will be the first game of the district tournament. You can lose every game all year, but if you get hot when it matters most, you can go deep.


“With each game, we’re building blocks and focusing on small things to get better. Over time, we’re starting to slow down, think better and make better decisions in the game.”

Pope was selected to this year’s 501 Basketball Team — 37 players representing the best the 501 has to offer both on and off the court. The team is sponsored by Conway Ortho and Sports Medicine, Conway Regional Health System and First Security Bank. The senior was nominated by his head coach, Brent Bruich.


“Spencer plays with heart, passion and tremendous effort,” Bruich wrote in his nomination. “He is a leader on the court, and one of his best qualities is his leadership. He is a good teammate and classmate, and he helps and serves others.”


Though the Bulldogs face an uphill climb over the next three weeks, Pope is no stranger to a challenge.


“I wasn’t the tallest athlete growing up,” Pope said. “I was short and pudgy, and I didn’t like it. Going into my sophomore season, I told my dad that I wanted to overcome that, and I went right to work. I started working out more and spent every weekend playing basketball. I worked hard to become the change I wanted in my life.”


Entering his final season with the Bulldogs, Pope set a goal to have a senior year with no regrets.


“This year, I wanted to make sure I didn’t regret anything I did,” Pope said. “Whether it’s a bad pass or a game-changing shot, win or lose, I want to know that my teammates and I did everything we could out there. We’re not the most talented team out there, but we all love each other as brothers and go to work hard every day.”


This week, St. Joseph faces cross-town rival Conway Christian — an opportunity for the Bulldogs to make a statement and move up in the conference ranks.


“Conway Christian is a must-win game for us,” Pope said. “To beat them, we really have to step up our defense and knock down our turnovers per game. We’re working hard to stay focused in practice this week because most of our turnovers are caused by our own mistakes.”


A past injury gave Pope a new outlook on the game he loves — a philosophy he still holds dear today.


“In the summer before ninth grade, I fell and broke my wrist in practice,” Pope said. “I had to wear a cast for a few months and couldn’t play or practice basketball. In a way, it was a good thing that it happened to me because it opened my eyes. Having the game almost taken from me made me love the game even more and inspires me to enjoy the opportunity that I have.”


Off the court, Pope participates in cross country and soccer for the Bulldogs, and is a member of St. Joseph’s Interact Club — a community service organization focused on giving back to Conway. In his free time, the senior enjoys reading, running, playing video games and focusing on his schoolwork.


“Spencer is involved in National Honor Society and other service organizations that do service projects for our school, parish and community of Conway,” Bruich wrote. “He genuinely loves and cares for his teammates on and off the floor and will do anything to help them out.”


“I want people to understand that I didn’t get to where I am today because of a natural gift,” Pope said. “I want people to know that I worked really hard to gain everything I have. In your life, there’s going to be a lot of people that probably won’t believe in you. At the end of the day, however, what matters is how you feel about yourself, and you can’t stop believing in yourself. Find motivation within yourself and not from other people.”