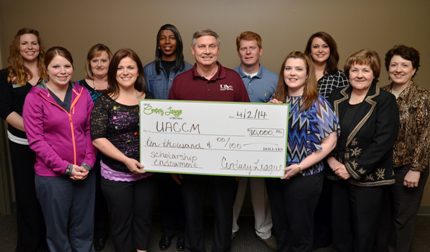 Following its 2014 Charity Ball fundraiser, members of the GFWC Century League of Morrilton presented $10,000 to the University of Arkansas Community College at Morrilton Foundation.  The donation is the largest made by the club in its 31-year history and will be added to the Century League Endowed Scholarship Fund at UACCM.

The Century League has awarded scholarships to area students since the club was founded in 1983, and last year, the club established an endowed scholarship fund at UACCM. Proceeds from the organization’s annual Charity Ball and 5K fund the scholarship program among other activities backed by the club. Continued support from the community has allowed for the increase in scholarship donations made by the Century League in recent years.


This year, the Century League’s gift will be used to add $7,500 to the endowment while the additional $2,500 will be awarded as $500 scholarships to five Conway County students attending UACCM.


The organization will continue to make annual contributions to the Century League Scholarship Endowment Fund, and when the endowment reaches the required $25,000 level, awards will be made in perpetuity from the interest earned from the fund. The scholarship fund will be managed by the UACCM Foundation, and the UACCM Scholarship Committee will select the recipients from the pool of eligible applicants.


Applications are available from the UACCM Financial Aid Office, and scholarships will be awarded each fall. To be eligible, students must be incoming freshmen, graduates of a Conway County high school, have a minimum GPA of 3.0, and submit an essay on the importance of community service.


For more information about this scholarship or the UACCM Foundation, contact Morgan Zimmerman at 501.977.2085 or [email protected].