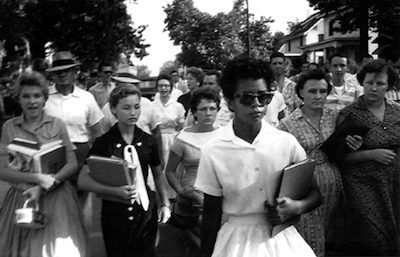 A free workshop on the role of the Arkansas Gazette in the Central High Crisis and its aftermath is planned Wednesday, Oct. 26, at the University of Central Arkansas.

Funded by a grant from the Winthrop Rockefeller Foundation, the workshop is aimed at teachers but open to the public. It will feature two documentary films: the 90-minute “The Old Gray Lady: Arkansas’s First Newspaper,” which tells the story of the Arkansas Gazette from its birth in 1819 to its death in 1991, and the 30-minute “The Crisis Mr. Faubus Made: The Role of the Arkansas Gazette in the Central High Crisis.” Both were produced by UCA and directed by Conway filmmaker and UCA alumnus Kevin Clark.


Participants will receive a packet with both films and a teacher’s guide with frameworks. Donna Lampkin Stephens, a sportswriter at the Gazette from 1984 until 1991, producer of both films and now assistant professor of journalism at UCA, will conduct the morning session. She is also a regular 501 LIFE contributor.


“Our films show an important part of American history that has not been fully explained before,” Stephens said. “We hope every Arkansan will become familiar with them.”


The shorter film’s title echoes the headline of a 1957 editorial that ran in the Gazette. Under the leadership of owner J.N. Heiskell, who served as editor for 70 years until he died at age 100, the Gazette became the first newspaper to win two Pulitzer Prizes in the same year for its coverage of the integration of Little Rock Central High School in 1957 as Gov. Orval Faubus called out the National Guard to prevent nine black students from entering the school. The newspaper won the Pulitzer for Meritorious Public Service, and its executive editor, Harry S. Ashmore, won the prize for editorial writing. The Gazette’s stance for law and order served as a voice of reason during those tumultuous months, according to the Pulitzer citation.


The Winthrop Rockefeller Foundation funded both films, with additional funding for “The Old Gray Lady” coming from the Arkansas Humanities Council, Fred Darragh Foundation and the Department of Arkansas Heritage. Dr. Joseph Anderson, retired chair of the department of mass communication and theatre, was executive producer and Mike Gunter, assistant professor of digital filmmaking, was director of photography.


The film follows the Arkansas Gazette from its birth in 1819, 17 years before Arkansas gained statehood, until its death on Oct. 18, 1991, when the Gannett Corporation sold its assets to Walter Hussman, owner of the Arkansas Democrat. Hussman then changed the name of his publication to reflect his purchase.


Mr. Faubus is the companion film to The Old Gray Lady. Academy Award-winning actress Mary Steenburgen, who grew up in North Little Rock, narrates the voice of the newspaper in both films.


The afternoon session will include presentations of research by Dr. Sondra Gordy of the UCA Department of History, author of “The Lost Year,” which chronicles the 1958-59 school year during which Gov. Orval Faubus closed the Little Rock schools, and Dr. Angela Webster-Smith of the Leadership Studies Department at UCA, who will present her findings on a study titled “The Status of Dr. King’s Dream in Little Rock and Memphis Schools.”

The study has been published in the March 2011 edition of the Electronic Journal of the Arkansas Association of Teacher Educators and the 2011 Annual Editions in Multicultural Education. As a child, Webster-Smith was present for what would become Dr. Martin Luther King’s final speech. The presentation will include some authentic film footage from the series of events of his life as it pertains to the study.


Sessions will run from 9 a.m.-noon and 1-4 p.m. with lunch provided. Teachers can earn a full day of professional development credit.