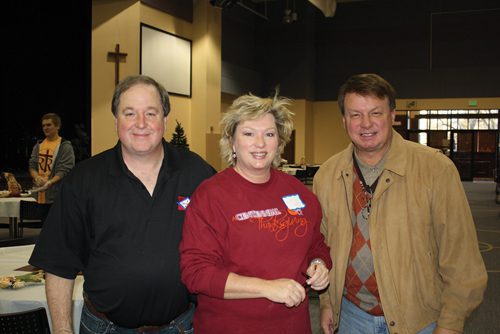 27 Oct 2010 Centennial Thanksgiving: ‘It’s a ministry to the community’

“You don’t realize it, but there are a lot of people that don’t have a family event that day,” said Lori, explaining that she and her family usually celebrate Thanksgiving later in the week.

Her boss wondered if the bank could handle the undertaking, she said, but she held fast to her idea.

“We do hamburgers and hot dogs for that many people all the time. You just change the menu,” she said.

To get the ball rolling, Lori talked to the Blankenships about how they accomplished the work year after year. “The bank employees really got behind it,” Lori said. “We’re used to doing large events. I was real pleased at the response.”

About 50 to 100 people volunteered on the day of the meal, and a total of 200 were involved in some way, she said. Many volunteers made desserts for the meal, for example.

Youth groups from around Faulkner County, supporters of Renewal Ranch and other community members helped in addition to the army of bank employees.

“We were overwhelmed by the number of volunteers. We had to turn people away,” Lori said.

On Thanksgiving morning, some of the employees brought their mothers to help with the cooking, she said.

“It was a full family affair for many of us,” Lori said. “The biggest problem I had all day long was too many volunteers, and that’s the best problem you could ever have. “
Centennial Bank/Home BancShares CEO Randy Sims said of the community event, “I think it’s a vital part of Thanksgiving Day. Some of these people are not going to get a meal unless somebody takes the ball and runs with it. We appreciate everyone who works with us. We think it continues to be an important part of Thanksgiving.”

He said those who volunteered received as much as or more than they gave last year.

“It’s not as much a service to us to do this,” he said. “From talking with the people who participated last year, it was something that really meant something to them to take lunches to people as well as to serve the people who came to the church. It’s a great opportunity to get more than we give in doing this. The volunteers are great, and the people appreciate it. It’s a fantastic opportunity for us. You’ll see us continue to do it.”

Everyone in the community is invited to the meal with no questions asked about income. Lori said whether people do not have a family event, are lonely or just want a good meal, everyone is invited.

“I truly feel it’s a ministry to the community. We invite everyone who’s displaced or just needs a meal or is lonely. It was neat (last year) to see that we could touch someone’s life in a different way on a holiday,” she said.

Last year about 350 people attended the meal, and another 300 meals were delivered.

Co-sponsors of the meal are the bank, First United Methodist Church and 501 LIFE magazine.

The 2010 Community Thanksgiving Dinner will be from 11:30 a.m. to 2 p.m. on Thanksgiving Day at the First United Methodist Church Great Hall. The menu will include ham, turkey, dressing, gravy, sweet potatoes, green beans, corn, cranberry sauce, rolls and a variety of desserts.