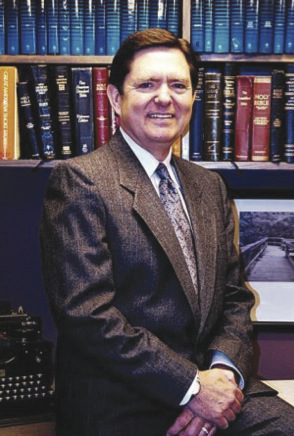 On Sunday, June 10, Woodland Heights Baptist Church in Conway will celebrate “25 years of God’s blessing on us,” said the Rev. David Hatfield, the senior pastor for most of that time.

“I came here when the church was just a year old,” he said. “It has been a great ride.”

When Hatfield arrived, Woodland Heights was known as “the church on the go” because it had no building. The congregation met sometimes at Beaverfork, other times at Salem Methodist and still other times at the Baptist Student Union at the University of Central Arkansas.

The Hatfield family arrived July 18, 1988, and in October the congregation moved into the building on Prince Street that is now the fellowship hall. The interior was unfinished, and the congregation worked together to complete it.

“That created a tremendous fellowship that is still here,” Hatfield said. “There is something unique about hands-on investment.”

Hatfield and his wife, Cheryl, met in church and have been married for 42 years. They have two daughters, Laine Berry and Leigh Middleton, and one granddaughter, Audrey Middleton, 5.

Hatfield has been in the ministry 44 years, entering when he was 18. He worked first as a youth and youth/music minister, and then pastored churches in Casion, Dickson, Stroud and Oklahoma City, Okla., before coming to Conway.

Like many others, Hatfield says he “surrendered to the ministry” reluctantly.

“I had always wanted to be a doctor, a cardiovascular surgeon,” he said. “I bargained with God; I promised him just about anything if he would let me go, knowing where we were headed. I don’t see the ministry as a profession; it’s a calling. It isn’t anything that as a child you think about doing.”

He had completed two years of pre-med at Central State University (now the University of Central Oklahoma) in Edmond when he finally gave in.

The Hatfield family moved to Conway from Oklahoma City, where he served Southwood Baptist. They were there five years.

Hatfield was actually considered by another Conway church before Woodland Heights.

Roy Chatham, who had heard about Hatfield through his daughter, April, who attended Southwood while at the University of Oklahoma, called and asked Hatfield if he would consider a call to a Conway church. The timing was right.

“We recognized that our ministry at Southwood was coming to an end,” he said. “You just know when God says you’re getting ready to move.”

But there was no fit.

“We felt extremely called to Conway, but not to that church,” said Hatfield.

A year later, Chatham called again and asked Hatfield to consider a call to Woodland Heights.

Part of the Woodland Heights pulpit committee visited Hatfield’s church shortly thereafter. Hatfield heard someone say “amen” about something, an unusual event at Southwood. A week later, the whole pulpit committee visited, and a week later Hatfield preached at Woodland Heights. He expected the congregation to take some time mulling his call, but in fact it was only a week.

“For my wife and I, that was one of the longest weeks of our life,” Hatfield said.

Hatfield plans to retire in three years, and he is already praying about how the transition can be made smoothly for both the congregation and the new pastor.

Because he has been at Woodland Heights for 24 years, Hatfield is now baptizing the children of adults he baptized when they were children.