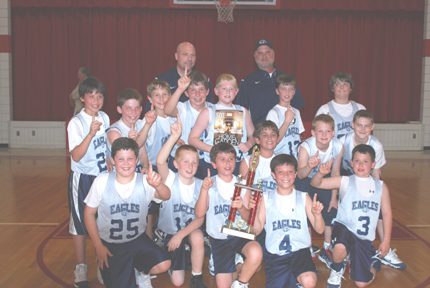 The Conway Christian School fifth grade boys team recently won their conference tournament to finish the season undefeated in all play with an overall record of 10-0.

The boys competed in a local conference, playing eight regular season games against Sacred Heart, Wonderview, Nemo Vista and St. Joseph. The conference tournament was held at Nemo Vista, where the CCS boys initially drew a bye and then played two games to clinch the conference title.


While the CCS boys were highly favored in the championship game against cross-town rival St. Joseph, the game lived up to its usual hype. The game was exciting with St. Joseph cutting the lead to only four points as late as the third quarter, but CCS held out for an 18-11 win to secure the championship. With this win, the CCS boys completed a perfect season.


What made this team of 15 special is that each player contributed to the success of this team and the team spirit was undeniable. The team focused on rebounds and assists and the points always took care of themselves.


Even in the championship game, no one player scored more than four points with a total of seven players getting on the scoreboard. The friendship and comraderie among the boys was evident even from the bleachers. That combined with their intense energy and enthusiasm made for an unbeatable defense as well. A great combination led to an undefeated season for a talented group of friends turned teammates as this was the first year for the boys to play school sponsored basketball and they certainly represented their school well.


The team was coached by Kevin Griffin and Mark Wood, who said, “There is nothing as fun as coaching kids that really want to play. They showed up at each practice ready to go. They are a great group of boys and we expect great things from them in the future.”