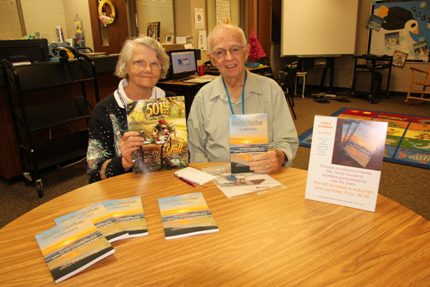 
The book was written primarily at the request of Chief Administrator Gloria Massey. “She wrote it so we wouldn’t lose her stories,” she said. “So our children and grandchildren could continue to have the message that God has given her.”


Donar is known throughout Conway Christian for her wonderful stories. “She uses every opportunity, every story, every lesson that she has ever been given in her life to point people to Christ,” Massey said. “She has an amazing gift of doing that and she can take such simple stories and see God’s hand in it.”


In regards to the book, Donar said, "…all the stories have a moral, they’re ‘teaching’ stories." The book contains tales of both simple occurrences and life-threatening experiences. “The adults like the story of my daughter’s boat adventure with the Mexican navy,” Donar said. “Drug agents were trying to steal their boat, they were fleeing for their lives.”


Along with the experiences from Donar’s own life, the book also contains both the stories of missionaries she met and character stories of famous Christians. One part even tells of Corrie Ten Boom, and how the Donar family knew her. “When this lady from Holland would meet you,” the book states, “she always would ask about your salvation. She glorified Jesus as she spoke.”


When Donar was asked how she decided which stories to use in the book, she said, “Well, it was hard because I have way over 100 stories. But, I thought, ‘Which stories do I usually teach?’ So, these are the stories that I usually teach. But, I wrote 50 stories, and I keep thinking, ‘Ah! I should have written that story too!’”


As she’s told her stories over the years, Donar has also impacted and encouraged future missionaries. One past student said to her, “God has used you to give me a passion for missions." Following this trend, the book’s profits will be used to assist missionaries.


In response to it all, Donar said, “It’s just amazing. It’s amazing to me because I’m not a fluent writer…I write the facts. I don’t put a lot of detail in. So, it’s not my writing, it’s the content that’s excellent.”