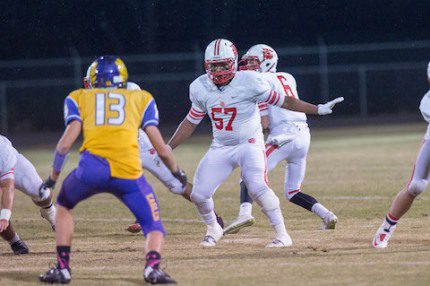 
“The game was sort of even throughout the night,” said Bramlett, a senior lineman Carter. “I don’t think there was a true turning point in the game, and truly each team fought hard until the end. Hey, we’re a well-trained opponent, and we are blessed to have defeated them.”


The Eagles will now hit the road for their 2A semifinal matchup with McCrory.


“This is absolutely huge for us,” Bramlett said. “Our school has never done anything this big in the football program. We have a ton of support from other students and our families as well. The school as a whole is pumped to get a chance to win state.


“[To beat McCrory] we have to improve our running game tremendously. We have to be able to threaten them with run and pass in order to keep them on their toes. Defensively, we have to shut down another good running offense.”


Bramlett said after 13 straight weeks of football games, the senior is in awe of what the Eagles have accomplished.


“I will admit that at the beginning of the season I had no idea what to expect especially after losing our first two non-conference games,” Bramlett said. “But we are thriving right now, and we are excited to keep moving forward.”


“I feel like we played very well Friday,” said Iverson. “Scoring so fast on our first drive gave us a lot of confidence, and we all came out intense defensively. I think our defense was the key thing that sealed the win for us.”


The Lions will hit the road for the first time in the playoffs, travelling to top-seeded Rison for the other 2A semifinal.


“Making it this far is huge for our team and our community,” Iverson said. “It gives us a sense of pride for this city, like the city is on our back. To beat Rison it’s going to take a very high level of focus. We know that we are going into a very hostile environment, and we will have to play mistake-free football.”


Harding Academy is the lone 501 team remaining in the 3A. The Wildcats will play host to Prescott this week in a 3A semifinal.


The 501 boasts two teams in the 5A championship — Pulaski Academy and Little Rock McClellan. No 501 teams remain in the 4A, 6A or 7A playoffs.