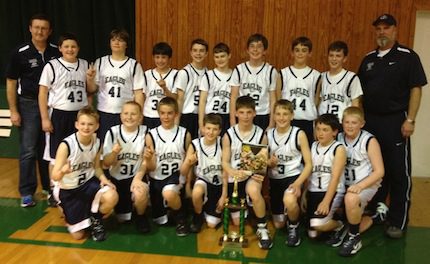 The Conway Christian Sixth Grade Boys Team recently won its conference tournament to finish the season undefeated in all play with a record of 11-0.

The boys competed in a local conference, playing nine regular season games against Sacred Heart, Wonderview, Nemo Vista, Clinton and St. Joseph. The conference tournament was held at Wonderview, where the CCS boys initially drew a bye and then played two games to clinch the conference title.


While the CCS boys were highly favored in the championship game against Clinton, the game was exciting with Clinton cutting the lead to only two points late in the fourth quarter. CCS held out for a 31-27 win to secure the championship. With this win, the CCS boys completed back-to-back perfect seasons with an unbelievable two-year record of 21-0.


This CCS team of 16 represents a special group of boys, definitely a team to watch in the future. They have set a new school record at CCS in this division by winning back-to-back conference titles and have represented the school well both years.


Each player on the team contributed to the success. They focused on rebounds, assists and high pressure defense. They are all very competitive on and off the court, even in the classroom.


According to Coach Mark Wood, who has coached these boys both years, “This is an outstanding group of boys, both athletically and academically, and a true example of how iron sharpens iron even in the youngest of men. I expect great things from them in the future.“