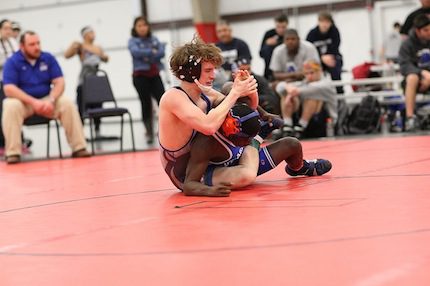 CBC entered the tournament with a full line of 12 wrestlers for the first time since the program started in 2010-2011. The Mustangs battled tough, finishing the tournament tied at 10th place with Benedictine College.


Shelnutt, a native of Morris, Ala., stepped into the CBC wrestling program as a dominating force his freshman year. He entered the 2012 post-season with a winning record but was defeated by injury three days before the 2012 NAIA Central Regional Tournament.


Shelnutt was focused to not allow last year’s setback to repeat itself. He entered the 2013 Central Regional Tournament with an overall 18-16 record and wrestled  tough competition to proclaim the first regional tournament placer for the Mustangs in the young history of the program.


Travis battled tough, wrestling back after losing in the second round. He was able to regroup and continued battling for a spot to the 2013 NAIA National tournament. At the end of the day, Travis claimed his ticket to the national championships by placing fourth in the 125Ibs weight class.


“I am not surprised at Travis’ success,” said CBC wrestling Coach Ken Prophete. “He is a hard-working guy and earned every win that is on his record. Travis is going to have a good national tournament and I am looking forward to coaching him here in two weeks.”


Shelnutt will enter the 2013 NAIA National Championship with a 21-18 record as a fourth seed.


Just falling short of qualifying was red-shirt junior John Lopez, a two-time national qualifier for the CBC Mustangs. He was a match away from claiming an All-American status in the 2012 NAIA National tournament.


Lopez  fell short of returning back to nationals for a third time and ended his junior year with a 20-18 record and a sixth place finish at the regional tournament.


“This was a tough one for me to swallow, so I can only imagine how he feels,” Prophete said. “As hard as it is for Lopez and other guys on the team that just did not quite make it, this is not the end of the road for John or the other 10 wrestlers who will be returning into the line-up next season.”


The Mustangs ended their regular season with an over dual record of 7 – 13 and had a number of guys place at various tournaments throughout the season.


“Though we only have one guy qualified for the national tournament, the overall season was not great but it wasn’t bad. It leaves plenty of room to grow and we will continue to develop and grow each year.” Prophete and Shelnutt will travel to Des Moines, Iowa, for the 2013 NAIA National Tournament on Wednesday, Feb. 27. Wrestling is set to begin Friday, March 1, and conclude Saturday, March 2.