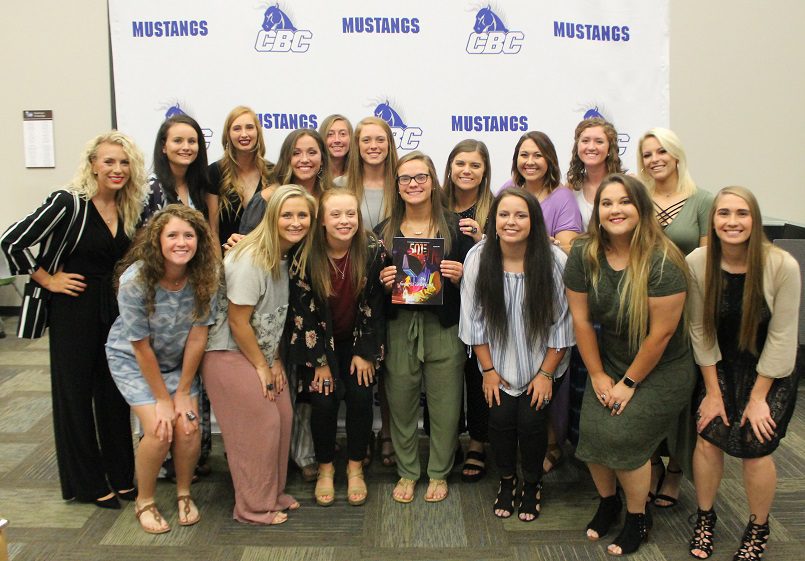 In recognition of their 2018 National Christian College Athletic Association World Series championship, the Central Baptist College Softball Team recently received their championship rings at a special ceremony at the Story Library at CBC. This was the second NCCAA National Championship for the Mustangs, following their triumph in 2010.

“I would like to thank the friends, families, faculty, staff, Mustang Club, VP Ryan Johnson, VP Sancy Faulk, our AD Lyle Middleton, President Kimbrow and anyone else who followed these girls last year for the amazing outpouring of support,” said head coach Jordon Jones. “Tonight was something these girls will never forget and it was made possible by so many people.

“Thank you to Erik, our SID, who continues to follow us and keep everyone updated with our progress! We will continue to play for you all and be grounded by the fact that this game is a blessing and can be used as a way to bless others. Go Mustangs and let’s keep building!”

The Mustang softball team went 42-19 last season and played for the American Midwest Conference championship. In the NCCAA playoffs, the Mustangs went 7-0, winning both games in the NCCAA Central Regional and then sweeping through the World Series, beating Oakland City 7-3, Trinity International 6-5 in nine innings and Cincinnati Christian 8-0 in five. The team then defeated Warner 9-5 in the semifinals before capturing the title by a 5-2 score over Belhaven.

Kymberlie House was named the most outstanding player of the tournament and was joined on the all-tournament team by Allison Seats and Alyssa Estrada.