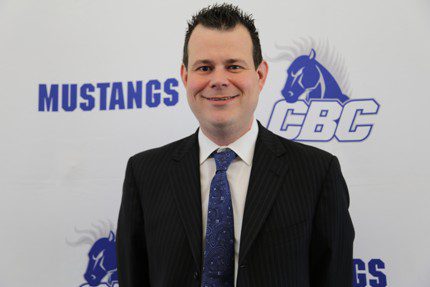 
CBC Athletic Director Lyle Middleton recently made the announcement at a press conference. Wright will succeed Wes Sullivan, who resigned in April.


“Coach Wright brings a lot of experience to CBC, and we are happy to have him here,” said Middleton. “He’s been in this profession for 14 seasons, five of which have been in the NAIA and he’s been a winner. He brings a winning attitude and strong, Christian beliefs to this position.”


Wright comes to Conway from Angelo State University, an NCAA Division II institution in San Angelo Texas, where he served as an assistant on Cinco Boone’s staff last season. He helped guide the Rams to a 17-12 record and an appearance in the Lone Star Conference tournament final. During the season, ASU reached as high as fifth in the national poll.


Wright also was the academic coordinator, helping the team to its highest GPA ever in program history and signed the No. 1 junior college point guard before the season.


“He has strong ethics and morals and strives to do things the right way the first time. I rate him as one of the top recruiters in the country,” Middleton added.


Prior to his stop in San Angelo, Wright served as the head coach at Graceland University, an NAIA school in Lamoni, Iowa. In his lone season at Graceland, Wright nearly tripled the win total from the previous season, leading the Yellowjackets to a 17-15 record. He also had a 6-3 record against top-25 teams during the season and led the school to its first ever NAIA national ranking at 25th.


Wright also has previous experience in Arkansas, spending the 2014-15 season at Arkansas Tech in Russellville. While at Tech, Wright helped lead the Wonder Boys to an 18-win season and a trip to the NCAA Division II Tournament. He also signed the team’s leading scorer two weeks into his tenure.


In his first opportunity as a head coach, Wright led the Fresno Pacific University men’s basketball team from NAIA through a successful transition to NCAA Division II. In four seasons (2010-2014) in Fresno, Wright accumulated a record of 67-52, while coaching 10 All-Americans and 15 All-Conference selections. In 2012-13, FPU’s first season as an NCAA Division II school, Wright led the team to a 21-9 record, his most wins ever as a head coach. He won two postseason games that season in the NCCAA tournament. In his first season as the head coach, Wright led the Sunbirds to a 20-11 record and the semifinals of the Golden State Athletic Conference tournament.


Prior to being named the head coach at FPU in 2010, he served for four seasons (2006-2010) as the associate head coach and recruiting coordinator under current Cal State-Los Angeles head coach Jim Saia. While serving as an assistant, the Sunbirds were ranked in the top-five in the nation twice and played in the NAIA Tournament twice, reaching the third round once.


Prior to his stop in Fresno, Coach Wright spent the 2005-06 in San Marcos, Texas, as the director of basketball operations for now Ouachita Baptist head coach Dennis Nutt. While there, he helped develop three players who are playing professional basketball overseas.


Wright’s coaching career began as an assistant at St. Edward’s University in Austin, Texas. While there, Wright was instrumental in signing a recruiting class that produced back-to-back NCAA tournament appearances.


Coach Wright earned his undergraduate degree in applied learning and development from the University of Texas-Austin. He also earned a master of arts degree in kinesiology from Fresno Pacific. He is engaged and lives in Conway.