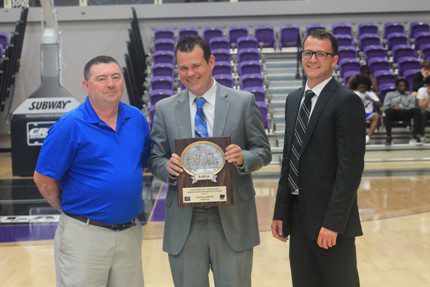 Central Baptist College men’s basketball was recognized by the Arkansas Basketball Coaches Association at a reception on the University of Central Arkansas campus. CBC was recognized as the top NAIA, Division III or other program in the state in 2016-17.


The Mustangs finished last season 23-12 and 14-8 in the American Midwest Conference tournament, which was good for the No. 3 seed in the AMC tournament. CBC fell to Harris Stowe in the first round of the tournament, but went on to win the National Christian College Athletic Association Central Region and get to the Consolation Round of the NCCAA National Tournament in Dallas.