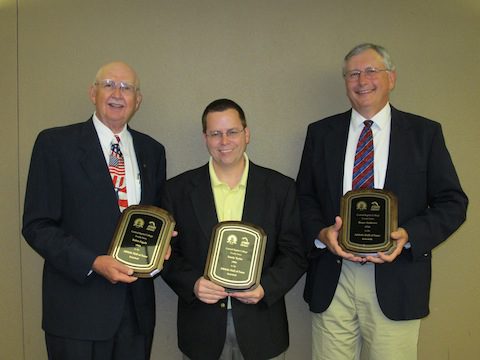 02 May CBC inducts three into Hall of Fame

Central Baptist College recently honored the three newest inductees into the CBC Sports Hall of Fame at the 2012 Athletic/Hall of Fame Banquet.


Each individual was selected for outstanding achievements as a CBC Mustang both on and off the court.

This year, CBC acknowledged the achievements of Bruce Andrews of Cabot, Robin Fagala of Broken Arrow, Okla., and Sandy Taylor of Dover.


While a student at CBC, Andrews earned the Highest Academic Achievement Award, Leading Scorer, Leading Rebounder, Highest Field Goal Percentage and Outstanding Player in the Ozark Junior College Athletic Conference. In 1986, he was selected to play on a mission basketball team in Brazil.


Andrews became a certified public accountant in 1979, is a member of AICPA and is the chairman of the accounting and auditing committee for Arkansas Society of CPAs. Andrews and his wife, Karen, have three children, Daniel, Rachel (Speer) and Nathan; and three grandchildren: Hannah and Luke Speer, and Zeke Andrews.


Fagala is a retired chief deputy for the U.S. Marshal of the Northern District of Oklahoma. He earned an associate of arts degree from CBC and graduated in 1964. He played basketball from 1962 until 1964 and led the team in scoring, was the leading rebounder, and served as captain in the 1963 season. He spent more than 30 years in the law enforcement career, served for 37 years in the Arkansas Army National Guard, retired in 2004 as command sergeant major of the 142nd Field Artillery Brigade, and now owns a private investigation agency.


Fagala earned the Bronze Star from his time spent in Desert Storm and Legion of Merit from the U.S. Army. He and his wife, Myrna, enjoy travelling as well as motorcycle rides and golf. They have three children and three grandchildren.


Taylor is the minister of administration and outreach at First Baptist Church in Dover. He attended CBC from 1985 to 1987. While at CBC, Taylor led the team in three point percentage and assists. As a standout point guard, Taylor was recruited by Belhaven in 1987. After his career at CBC, Taylor graduated from UCA where he obtained a bachelor’s degree in history with a minor in physical education.


In 1999-2000, he led the AAA Dover girls basketball team to the state championship and was named the KARV Dream Team Coach of the Year and KCJC Coaches Choice of the Year. Most recently in 2012, Taylor was elected to the Dover Hall of Fame. He and his wife, Laurie, have two daughters, Shelby and Brooklyn.