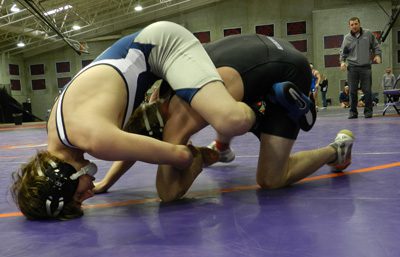 
Fifteen Mustang wrestlers represented the 501 in the event, with more than 150 wrestlers from 18 different teams in attendance, including some of the top college wrestlers in the country.

“I sent out invitations to every college and university across the country, inviting them to our wrestling tournament,” said CBC wrestling coach Ken Prophete. “This year, we had a 20-percent increase in [attendance] than last year, so the word is getting out about the tournament.”


Freshman Travis Shelnutt shined during the meet, placing third in the 125-pound weight class and beating out many wrestlers that the team will face in the upcoming regional tournament on Friday, Feb. 17, in Des Moines, Iowa.


“Our strength is our determination and work ethic,” Prophete said. “This group of guys has heart and does not like to lose. That alone is better than any talented athlete on a coach’s lineup across the nation.”


Injuries have been an issue for the team as of late, forcing the team to cancel its upcoming events leading up to the regional tournament in order to recuperate.


“With all the injuries this season, I felt that it was best to remain home to train and heal up a little so we can go into battle at the regional tournament with more of an edge,” Prophete said.


Despite the injuries, however, the team refused to drop out of the Mustang Open, citing its valuable benefits.


“With this tournament, we are able to see our regional competition early,” Prophete said. “My ultimate goal is for it to grow into a nationally-recognized event, with some of the toughest teams in the nation coming to compete and Central Baptist College being one of those teams.”