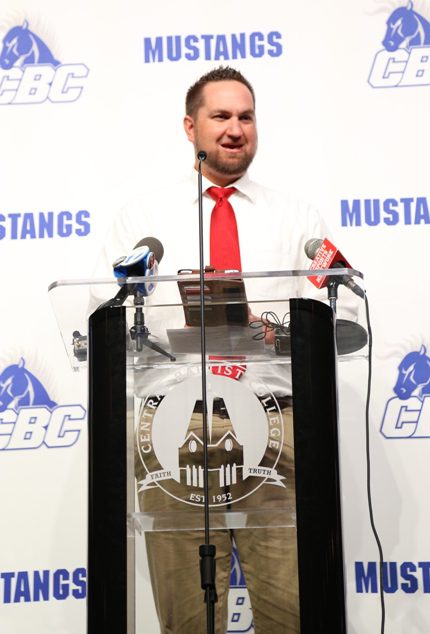 The Central Baptist College Mustang Baseball team will be the first Arkansas team to play a game in Busch Stadium in St. Louis.


The agreement between the St. Louis Cardinals organization was announced at a press conference held on the CBC campus.


The CBC Mustangs will play St. Louis Community College on Saturday, Oct. 1, in Busch Stadium immediately following the Cardinals game with the Pittsburgh Pirates. The CBC game is tentatively set to begin at 6:15 p.m.


“With our new American Midwest Conference headquarters being in the St. Louis metro, this is definitely a recruiting area for us,” said CBC Coach Dr. Aaron Brister. “We are excited to give our players the opportunity to play in this venue.”


The Mustangs were runner-up finishers in the National Christian College Athletic Association’s (NCCA) Central Region Tournament in 2015. The Mustangs received an invitation to play in their first ever NCCAA World Series and finished the season with a school record of 31 wins.


“The St. Louis Cardinals Amateur Game Program has been an ongoing experience for more than 30 years here in St. Louis,” said Cardinals Account Executive Jesse Blackstock. “Hopefully, the participation of CBC this season will serve as a blueprint for others in the state to follow in the future.”

“It’s a wonderful opportunity for our student-athletes, and we appreciate the Cardinals allowing us to participate in this unbelievable experience. We hope that all Central Baptist College students, faculty and alumni will join us at the Cardinals game and stay afterwards to watch our Mustangs," said CBC President Terry Kimbrow.


Y107 will partner with CBC in bringing this exciting special event to life. JR Runyon will be doing live play by play from Busch Stadium on My Country Y107 and online at Y107fm.com.


Tickets are $15 for general admission for both games and are available at cbc.edu/cardinals or by calling 501.205.8920.