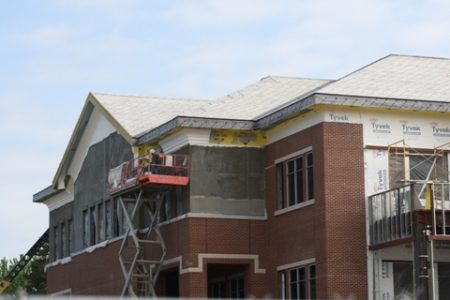 Until now, the newest addition to the campus of Central Baptist College in Conway has been referred to simply as the “Academic Building.” However, students, faculty, staff and the Conway community will know it as the “David T. Watkins Academic Building” when the doors to the new building open this fall.

The 38,000-sq.-ft., three-story structure will bear the name of Watkins, who recently retired as senior pastor of the First Baptist Church in Magnolia after 23 years of service.

The naming of the building came as a result of a lead contribution to the Vision 2020: A Miracle in the Making campaign made by Max and Debbie Story, longtime members of First Baptist and close friends of Watkins. Vision 2020 is a plan to complete 10 major construction projects in 10 years to accommodate a student enrollment of 2020. A 10-year master plan completed by Sowell Architects of Conway is guiding the projected expansion. The new building is the first major project in the plan.


“He has done so much for the Association (BMAA – Baptist Missionary Association of America) and for First Baptist Church of Magnolia and I want to honor him in this way,” said Max Story.

Prior to going to First Baptist in 1988, Watkins pastored churches in Texarkana, Ruston, La., and Crossett. Watkins has held numerous denominational offices on the state and national level, including serving as president of the Baptist Missionary Association of America from 2006-2008 and as chairman of the Coordinating Council of the BMA of America from 2009-2010. Watkins served on the CBC Board of Trustees from 2002 – 2006 and also filled a one-year unexpired term in 2008. He has also been an active member of the Magnolia Rotary Club for the past 23 years, serving on the board. He has been recognized by the club as a Paul Harris Fellow, an award named after the founder of Rotary International.


“It’s a fitting tribute to a humble servant and great man of God,” said CBC President Terry Kimbrow. “Not only is he a past CBC board member, he is a trusted friend. I have turned to him frequently for encouragement. He almost always ends our phone conversations by praying with me.”

Watkins is a native of Waldo. He and his wife of 44 years, Sheryl, are the parents of three adult daughters. Krista Roberts and husband Dale make their home in Cleveland, Miss.; Katie May and husband Rodney live in Magnolia; and Kara Way and her husband, John, live in Little Rock. The couple also have four grandchildren: Maggi, Hallie Kate, Heidi and Dustin.


Clark Contractors of Little Rock has projected a completion date of mid to late June. Installation of furniture and computer systems will follow allowing the building to be operational when classes begin on Monday, Aug, 20. The ground floor will house offices that directly serve the students in addition to administrative offices. The Bible and Missions departments will be located on the second floor along with a 100-plus seat lecture hall, conference rooms and classrooms. The third floor will be dedicated exclusively to classrooms.


A date for the dedication service and open house for the David T. Watkins Academic Building will be announced later this summer.