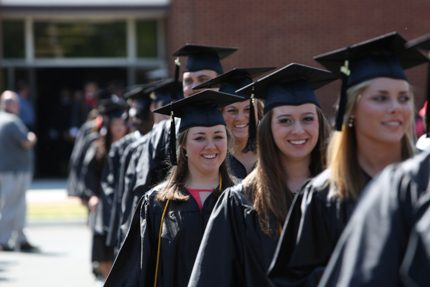 Central Baptist College is set to honor its 2014 graduates in two commencement ceremonies at 10 a.m. and 2 p.m. Saturday, May 10, in the Burgess Auditorium. This year, CBC celebrates 146 graduates which includes 67 PACE graduates and 79 traditional graduates.

The Professional Adult College Education (PACE) ceremony will be held at 10 a.m. followed by a reception for graduates and their families.

The traditional student ceremony will be held at 2 p.m. followed by a reception for graduates and their families.

Dr. Elmer Towns will deliver Central Baptist College’s commencement address. Towns is a college and seminary professor, author of popular and scholarly works (the editor of two encyclopedias), a popular seminar lecturer, a dedicated worker in Sunday school and has developed more than 20 resource packets for leadership education. He has published more than 100 books listed in the Library of Congress, eight listed in the Christian Booksellers Best Selling List; several becoming accepted as college textbooks. He is also the 1995 recipient of the coveted Gold Medallion Award awarded by the Christian Booksellers Association for writing the Book of the Year, “The Names of the Holy Spirit.”


Towns was president of Winnipeg Bible College for five years, leading it to receive American Accreditation and Canadian Provincial authority to offer degrees (1960-1965). He taught at Trinity Evangelical Divinity School, in Greater Chicago in the field of Religious Education and Evangelism (1965-1971).


Towns has given theological lectures and taught intensive seminars at more than 50 theological seminaries in America and abroad. He has held visiting professorship rank in five seminaries.  He has written more than 2,000 reference and/or popular articles and received six honorary doctoral degrees. Four doctoral dissertations have analyzed his contribution to religious education and evangelism.