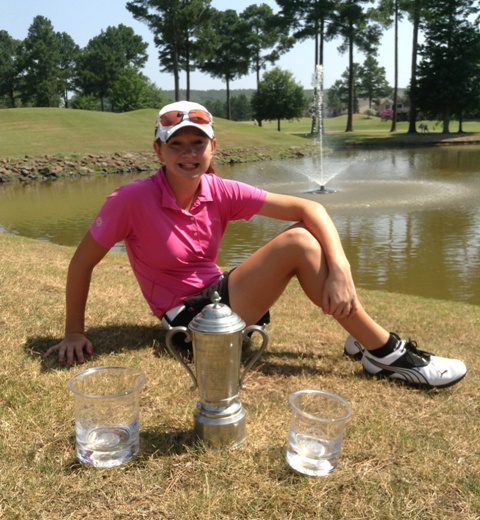 Ott, who recently turned 13, will hold the Mary Perrin Trophy for a year after escaping Kirsten Garner of Hot Springs in 19 holes. Last month she won custody of the Lou Miller Trophy when she won the Junior Girls Stroke Play title at the Country Club of Little Rock.


“It was like the grand slam like in baseball,” Ott said of her special summer. “I thought it would be pretty good because I shot in the 70s last year, but I didn’t know it was going to be this good.”


Ott qualified as the second seed for the match play. In bracket play, she rolled early, eliminating Abigail McGee of Bryant, 8 and 7; Taylor Reed of Little Rock, 6 and 4; and Taylor Loeb of Maumelle, 4 and 2, to reach the final against Garner, 17.


She took control midway through the final and started No. 17 with a 2-up lead, needing just to halve the hole to win. Instead, Garner birdied the next two holes to force extra. At No. 1 again, though, Ott put her approach five feet away from the hole and one-putted for par and the championship.


“After her first birdie, I thought, ‘All I need to do is par this next hole,’” Ott recalled. “I parred it, but then she birdied. Then I was a little mad. I was glad she was playing good but mad I wasn’t making those birdies.”


In the Junior Girls Stroke at CCLR, Ott carded 82-76—158, making birdie on her final four holes, to prevail over Maria Emma Edwards of Texarkana, Texas, by two strokes and best the field of more than two dozen, ranging in age from 12-18.

Ott was named to the Arkansas Tri States Junior Team that won its competition with Louisiana and Mississippi in June and competed earlier this week in the second Southern Junior State Cup at the Country Club of Jackson (Miss.).


Joining her on the co-ed Arkansas team team were Garner, Loeb, Hannah Bakalekos of Sherwood; Peyton Weaver of Benton; Stephanie Leake of Little Rock as well as Carson Roberts and Lincoln Hill of Conway, Davis Trice and Mason Adams of Fayetteville, Peyton Wilhoit of Searcy and Cameron McRae of Little Rock.


The competition included four-ball and foursome matches consisting of two-person teams of one boy and one girl and individual singles matches of single-sex competition among players from Arkansas, Mississippi, Missouri and Oklahoma.


Ott and Roberts teamed to win both their matches Monday. At press time, they were facing singles matches Tuesday.


Searcy’s Wilhoit won the ASGA Junior Boys Match Play Championship and secured the ASGA’s Junior Boys Player of the Year Award for 2013. Roberts reached the quarterfinals of the Junior Match.


Ott will be an eighth-grader at Conway Junior High this fall, a year away from joining the defending state champion Conway Lady Cats.