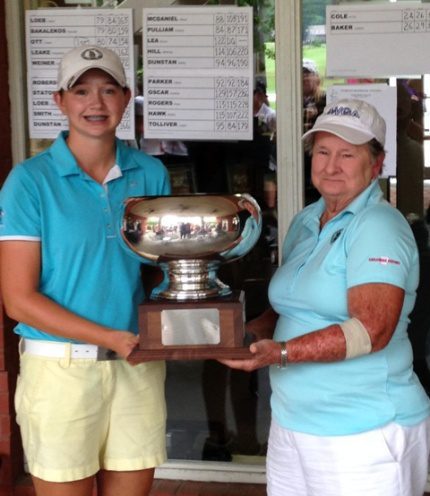 
It’s been another stellar golf season for Conway’s Casey Ott, and at press time, it wasn’t even over.

Ott, barely 14, has been in Cape Girardeau, Mo., all week as a member of the Arkansas team for the Southern Junior Cup Matches, a competition among Arkansas, Missouri, Oklahoma and Mississippi. She qualified for the team after finishing third in the Arkansas State Golf Association Junior Girls Player of the Year race.


Three years at an Arkansas Razorback golf camp in the early part of the summer kick-starts the season for her every year, she said.


“Just working at it has helped,” she said. “I got a lot of good drills at camp, and I’m just more comfortable on the golf course. When I was younger and playing events with older girls, I’d be freaked out. Now if I get a quadruple-bogey, who cares? It’s just golf. That attitude brings something else to the table.”

She had swept both the ASGA Junior Stroke and Junior Match last year.


Compared to last year, she said, her game is better because her short game has improved.


“Normally I’m a long hitter,” she said. “I can hit it straight. I’ve always been confused because I think, ‘I hit it better than all these girls; why can’t I beat them?’ But last year at the Razorback camp, I got in my head that the short game is where it’s at, so I started working on that, and last year I could see improvement.


“This year (the short game) is still not my strength, but it’s not the weakness. When you don’t have the weaknesses that wear you down as much, you’re not going to suffer as much.”


Ott is already a two-time member of the Arkansas Southern Junior Cup team and a two-time representative of the state in the Tri States Junior Team, which encompasses Arkansas, Louisiana and Mississippi. She dipped her toe in American Junior Golf Association competition this summer, playing an open event (for ages 12-18), a junior one (12-15) and a qualifier.

“Next year I’ll probably expand more on the AJGA,” she said.


Ott, a freshman at Conway High School, missed her first high school matches while playing in the Southern Junior Cup Matches this week.


“My coach (Janet Taylor) encouraged me to come and play because I might not get invited next year,” she said. “The high school tournament is always going to be here.”


She’ll make her Wampus Cat debut today (THURSDAY, AUG. 7) at the North Little Rock Invitational at The Greens at North Hills in Sherwood.