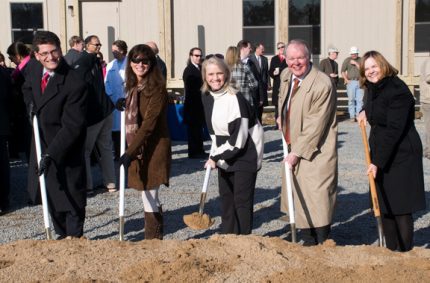 An ongoing capital campaign launched last year in support of establishing a proposed world class cancer center in Little Rock has already raised more than three-quarters of its multi-million dollar goal, according to officials with the CARTI Foundation.

“To date, we have raised more than $7.9 million – or about 79 percent – of our $10 million goal,” said Sharon Heflin, capital campaign co-chair and CARTI Foundation board member.


Targeted to open in the fall of 2015, the CARTI Cancer Center will be a multi-specialty, patient-focused cancer treatment center offering medical, surgical and radiation oncology and diagnostic radiology with clinics dedicated to imaging, infusion, research, pharmacy and support programs.


Projected cost of the 170,000-square-foot building, including furnishings and medical equipment, is $90 million.


“The success of this campaign will enable CARTI to open the doors of the new facility with the best of everything for the patient including surroundings and equipment,” said Heflin.  “This will allow patients to focus on the things which really matter.”


“One of the first rules of construction is to lay a solid foundation to help anchor and stabilize the structure being built,” said Braunfisch. “The CARTI Cancer Center will be a place where brilliant physicians can collaborate on a patient’s care and where the family will feel as well taken care of as the patient.”


Both Heflin and Braunfisch attribute major gifts from a number of early lead donors for the successful momentum of the capital campaign, including a generous gift from Janet and Sam Alley who donated a significant portion of the 37-acre site on Riley Drive just south of Interstate 630 where the CARTI Cancer Center is being erected.


Upon opening, the new CARTI Cancer Center will serve as the hub of a statewide network of satellite clinics that sees an estimated 20,000 cancer patients per year.


CARTI is a nonprofit, multi-disciplinary cancer center with facilities located throughout Arkansas. The CARTI Foundation was incorporated in 1983 as a non-profit organization to assist CARTI in meeting the current and future needs of Arkansas cancer patients and their families.