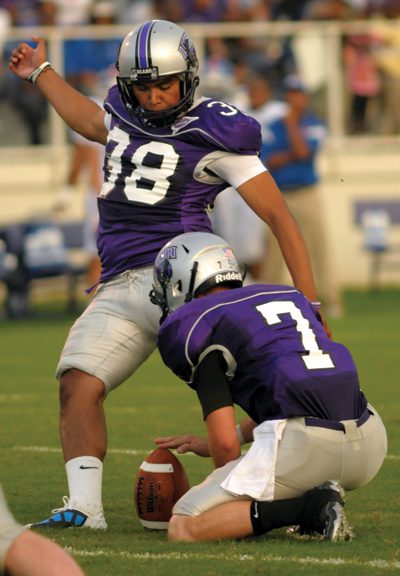 “I was on a job when I got the call to go to a junior college,” Carmona said. “It was my only option to keep playing at the time. I went to school for a year, redshirted and got a lot of experience in practice.”

His contact with UCA actually happened long before he came to Conway in 2008, but a number of circumstances postponed his arrival as a Bear.

Carmona signed on at Mississippi Valley State Community College, the same junior college that produced UCA standouts Larry Hart and Jacob Ford – both of which are now in the NFL.

Carmona was a two-time All-State selection out of Charleston High School (Franklin County). He helped lead the Tigers to a state title in 2005 after falling in the championship game in 2004.

Carmona had a number of highs and lows in his first year as a Bear, hitting 13-of-19 field goal attempts in 2008. Carmona hit both a physical and mental wall that season.

“I was really excited to be at UCA and starting my career as a Bear,” Carmona said of the 2008 season. “Everything started right, but then my leg started to get tired, and one of my first misses really got in my head. It had been two years since I had really played, and I just kept thinking about that miss. I couldn’t put it behind me.

“My coaches and teammates just really got behind me, and before I knew it I was back to before. The hardest part of being a kicker is the mental stuff. Even great NFL kickers get in situations like that sometimes. It’s hard to get it back. If you doubt yourself, it’s not going to be pretty.”
Carmona has learned to let go. He says moving on is the key after a miss.

“You just have to not think about it,” Carmona said. “You just start over each time, create a new chapter. Like everything else I learned from my first year, it all comes back to having confidence in yourself. If I have a bad miss, I just try to fix the problem and move on.”

Carmona took that strategy into the 2009 season, and it paid off in a big way. He finished second in the Southland Conference with 16 field goals made. He also finished a perfect 37-for-37 in PATs. He set a school record at Southeaster Louisiana with most field goals made in a single game (4). At the end of the season, Carmona was named to the All-Southland Conference First Team.

Carmona says the best experience during his time at UCA is that his family has been along with him for the entire ride. He and his wife celebrated their third anniversary Sept. 8.

“It’s amazing,” Carmona said. “It’s one of the best feelings to know that my family is there. They’re proud of me, and it’s just really exciting for me that they’re watching us play.”

Anyone who has attended a UCA football game in the last three years has probably run into one of Carmona’s relatives and just didn’t know it. His father-in-law is one of the more intense Bear fans at the stadium, always decked out with a fully painted face.

“He always did the same thing in Charleston,” Carmona said. “When we play, he’s always in full fan mode. After each game, he’ll show me what he’s going to do next week. He’s always planning for the next game. He takes a lot of pride in being a fan.”

On top of his place kicking duties, Carmona will also be handling punts this season. It will be a physical test, but he and the Bears have a new motivation this fall. UCA has completed its transition to Division I and is eligible for postseason play this year.

“The chance to go to the playoffs definitely makes the season even more exciting,” Carmona said. “The whole team is talking about it. Now we have a chance, and it just takes every one to another level on the field.”