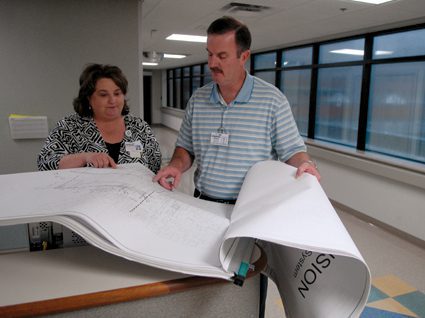 For those who will receive care within its walls, it will be a place where babies are born and individuals will be treated throughout their lives.

“From the time they enter life all through their life,” said Jacquelyn Wilkerson of the project. “That’s what is so great. We’ll be taking care of all ages.”

The expansion includes a new surgery department and additional obstetrics space. The addition will be north of the core of the medical center and connect with the Women’s Center. The two-story structure will have the capacity to be expanded to four stories to meet future needs.

The Conway Regional Board of Directors had approved the project two years ago but delayed beginning because of the economy and issues with the bond market, according to Alan Finley, chief operating officer. With the economic outlook more favorable, the board of directors voted earlier this summer to move forward. Funding for the project will come from the issuance of bonds, hospital reserves and private donations.
Wilkerson, who is director of the Women’s Center and interim director of surgery, has been involved in the planning and design for the project. She said the expansion of the Women’s Center is needed to help accommodate the increase in baby deliveries at the hospital.

According to Lori Ross, chief development officer and corporate director of marketing/foundation, the women’s center was built in 2001 and designed for the delivery of 1,500 babies annually. Last year, there were 1,755 babies delivered, making it one of the busiest women’s centers in the state.

The hospital currently has 16 labor/delivery/recovery/post-partum rooms on the second floor of the women’s center but with an average of eight births each day during the week and three to four on weekends, the hospital has outgrown that space. When those rooms are filled, expectant moms are placed in rooms on the first floor that are a little smaller. “The nursing care is the same,” said Ross. “The difference is the size of the room.”

Even with the additional rooms on the first floor, there are times when scheduled C-Sections have to be delayed because of space limitations.

About half of the babies delivered at Conway Regional are from Faulkner County, noted Wilkerson, who added that a lot of expectant mothers want to deliver at the facility because of its outstanding reputation and the quality of care from physicians and staff. “The Women’s Center is known for the great care women receive,” she said. “Word has spread that we have a great program here.”

The eight new obstetric rooms in the addition will help meet the demand, according to Wilkerson. She said the location next to the new operating rooms will also be convenient should a surgical need arise. She anticipates the number of births at Conway Regional will increase with the additional rooms.

Both Ross and Wilkerson noted that the hospital utilizes state-of-the-art equipment, which benefits patients. For example, a soldier deployed overseas was able to witness the birth of his child through tele-medicine. The same technology makes it possible for a mom who has delivered at Conway Regional to see her baby who has been transferred to Arkansas Children’s Hospital.

“We’re very fortunate to be on the cutting edge with technology, ” Wilkerson said. “We’ve been very fortunate to have technology that has touched lives.”
Finley noted that the new surgery department has been designed with larger operating rooms with higher ceilings to better accommodate new technology and equipment. The OR area is also designed to allow for future growth in the number of surgery cases.

The addition will make possible the expansion of several other departments in the hospital, including the emergency room, cardiac cath lab, imaging services and the laboratory. A new cafeteria is also included in long range plans.

Nabholz Construction is the general contractor for the project, which is expected to be completed in April 2012. The hospital has worked with Cromwell Architects to design the project.