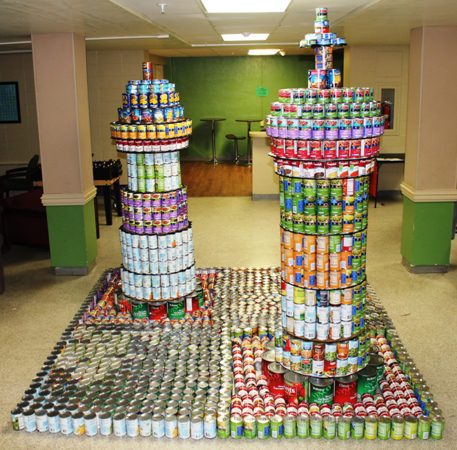 HP and 501 LIFE joined forces for the inaugural HP/501 LIFE CAN-struction event to help feed those in need. The project featured local businesses using canned goods to “canstruct” a structure or design.

The University of Central Arkansas entry titled “Checkmate” was the People’s Choice winner, narrowly edging out Southwestern Energy in voting on Facebook. The Nabholz Construction Services entry was the Judge’s Choice winner, determined by a panel who considered craftsmanship, creativity and overall appeal.


The project generated about 14,500 canned goods that were donated to five area food pantries.


“This is a fun way to help refill local food pantries after the first of the year when they need it most,” said Valerie Lane, an HP associate who led the CAN-struction project. Last year, HP associates participated in a CAN-struction competition held internally, with more than 7,000 items collected and donated.


The structures were built in early February. Some businesses constructed more than one entry, but only one was selected to be entered in the community-wide competition.


HP had seven teams compete, and the final winner was “Despicable Me.” The winner of Southwestern Energy’s internal voting was Team “CAN”figuration with their structure Ar“CAN”sas.


At Acxiom, the “Best Overall” winner was an Olympic village, complete with the Olympic flame, some background mountains, a small church and the Olympic rings. The entry was submitted by the AcxiCAN team.


UCA’s residential colleges collected more than 2,500 cans featured in the school’s entry. Brian James, an English instructor at UCA, shared the meaning behind the design. “Like a game of chess, the battle against hunger requires strategy, teamwork and sacrifice. It requires persevering when the situation gets tough.”


Organizers hope to make the CAN-struction event an annual community service project in Central Arkansas. CAN-struction is an international charity that hosts competitions, exhibitions and events that showcase structures made entirely out of full cans of food.

For more information or to participate, contact 501 LIFE at [email protected].