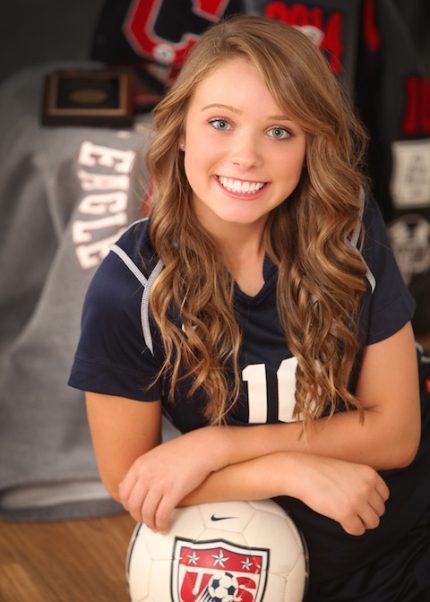 
The Conway Christian Lady Eagles are in the midst of a successful soccer season, and senior center midfielder Anna Cain is leading the charge.

“Anna is the captain of our CCS girls varsity team,” Coach Ancil Lea said. “She gives us tenacious play both on the defensive and offensive side and has a never quit, finish strong attitude! She is the servant leader of her team.”


The Lady Eagles are fighting for a return to the state playoffs. Conway Christian fell in the first round of the state tournament last year.


“As a senior, I want to help provide leadership and make our team come together and play to the best or our abilities,” Cain said. “[My main goal is] to give God the glory through the gift he has given me.”


Cain has been an all-state performer for Conway Christian for the past two years. Her contributions to the Lady Eagles are evident both on and off the pitch.


“She leads by example,” Lea said. “She’s always positive and encouraging to the other players. She was and is the backbone of our team, an incredible individual and an encourager.


“She embodies everything good you want in a player. I don’t know what I’m going to do without her. It has been one of the highlights of my coaching career to have been her coach for four years.”


Cain’s focus is her team. For example, according to Lea, she’s a center midfielder. But according to Cain, she plays “wherever Coach Lea needs me.”


Cain has played soccer since she was 5 years old. She was an active youth, but soccer separated itself as her “favorite, so I stuck with it.”


As she grew older, the game grew more complex, and her love deepened.


“The transition from club soccer to school soccer was difficult because the pace is much different,” Cain said.


Her raw talent helped her traverse the changes in the level of play. Her work ethic did the rest to take her to an all-state performance. And when properly motivated, she can accomplish big things on the field.


“My favorite memory is when Coach Lea told me before a game that if I got a hat trick he would wear a dress the next day,” Cain said. “I scored the hat trick, and he stuck to his word.”


Cain also participates in track and cross country athletics for Conway Christian. Outside of athletics, she is active in FCA, Beta Club, drama club and outreach. She is a member of New Life Church, participates in Ozark Mission Project and volunteers at Arkansas Easter Seals.