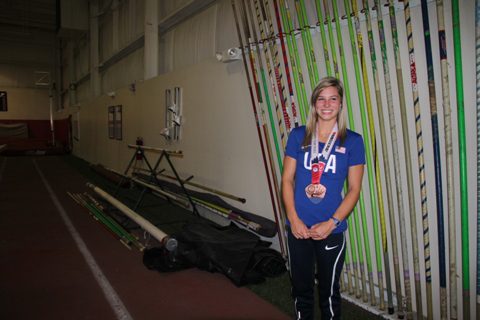 
As athletes from around the world gather for the opening ceremonies Friday at the Olympic Games in Brazil, the 501’s Lexi Weeks will be among them.


The Cabot athlete had a third place finish in pole vault during the Olympic Trials in Eugene, Ore., to secure a spot on the U.S. team and earn the title Olympian.


A few days later, back in her hometown, Weeks was still trying to process what had transpired and what would lie ahead in Rio. Friends were also organizing efforts to raise money to send her parents and twin sister, Tori, also an accomplished pole vaulter, to the Olympics to cheer her on.


Both Lexi and Tori attend the University of Arkansas at Fayetteville and had outstanding freshmen years on the track and field team.


Weeks was scheduled to arrive in Rio on Aug. 4 and planned to participate in both the opening and closing ceremonies for the Olympic Games. Preliminary competition in pole vaulting is scheduled Tuesday, Aug. 16. The Top 12 will compete Friday, Aug. 19.


“This is exciting not only for the school district, but for our community and state,” said Cabot School District Superintendent Dr. Tony Thurman. “We can’t imagine the number of hours of work and dedication that went into making this dream a reality for Lexi and her family. If we were not planning to watch the Olympics this year, I know of at least one event that is now probably going to be on everyone’s watch list.”


According to Leon White, head coach for track and field at Cabot High School, the Weeks twins have had a big impact in Cabot. “The twins, Lexi and Tori, have changed how we look at track and field in Cabot,” he said. “They have shown the community and their teammates if you are willing to work, hard dreams can come true.


“Lexi’s 14-7.50 outdoors and Tori’s 14-4 indoors in high school were unbelievable, with both holding national records. Both signed with the University of Arkansas and the dream continued, with Lexi winning the collegiate indoor and outdoor nationals!


“The Olympic Trials have always been part of the dream. Placing third in the trials with an amazing vault of 15-5 was exciting and somehow we knew Lexi would make it.”


White is confident in Lexi’s abilities and looks forward to seeing how she does at the Olympics. “Lexi handles pressure so well and makes the most of opportunities that come her way. She is Rio-bound and very determined to do her best. A medal is definitely possible simply because she knows how to focus her energies when the pressure is on.”


Cabot School District Athletic Director Steve Roberts described Weeks making the U.S. Olympic Team as a “huge inspiration” for younger athletes in all of the district’s programs. “While making the Olympic team is an ultimate inspiration, both Lexi and Tori have already made a tremendous impression on many of our students through demonstrating a fantastic work ethic in athletics, a commitment to academics and through their willingness to serve others,” he said.


“As the head track coach at Cabot, watching all the success Lexi and Tori have had together, I feel blessed they were part of our track program,” said White. “Lexi is the first Olympian from our school and her performances have set the bar high. Finally, Lexi and Tori, are just great kids from a wonderful family. They have been taught if you work hard good things will happen. They have made their community and family proud.


“The future looks bright for these twins from the small town of Cabot, Arkansas.”