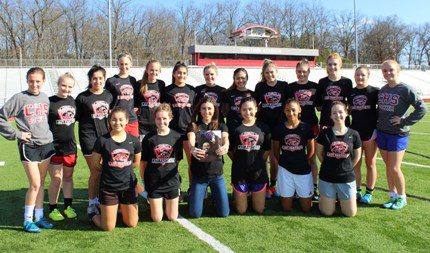 
“We are extremely excited and proud of this recruiting class,” said Head Coach Jeremy Bishop. “We are graduating some players this year that did things for our program that will be very difficult to replace and we have returning players that I believe are ready to step in and fill those gaps. But at the same time, I believe that every one of the members of this class has the chance to come in and compete for spots and minutes during their freshman year. The competition level is going to be really strong for us next fall.”


Dickinson, a Cabot native, will contribute in the midfield for the Bears. A three-time All-Conference selection, Dickins helped lead the Panthers to three conference championships, a pair of state runner-up finishes, and a state championship in 2015. She has twice been named to the All-Tournament Team. Dickinson also helped lead her club team, Arkansas United, to five state championships from 2011 to 2015.


“With the exception of the goalkeeper position, this class will provide competition at every position on the field,” Bishop said. “It has a lot of athleticism and soccer ability and they all come from solid club and high school experiences. We have All-State and All-Conference performers, high school state champions and standouts from the top club league in the country, the ECNL.


“On top of all of their abilities on the field, this group of young ladies is also very motivated and has proven to be high character individuals. I have no doubt that this group, combined with our returning players, will keep us at a level that will allow us to compete for another championship in the Southland. I can’t wait until August to get everyone together and start working toward that goal!”