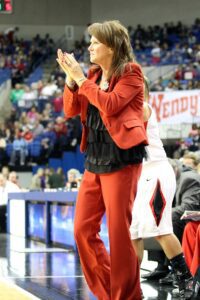 Cabot Lady Panthers Head Basketball Coach Carla Crowder has announced she is retiring at the end of the 2018-2019 school year.

Growing up, Crowder was an active basketball player, thanks to her parents who both played the sport. Her high school record included 170 wins and 16 losses. She was named MVP numerous times and was All-Conference.

Crowder has two older sisters and two younger brothers. “Our parents made us what we are today. They instilled in us hard work and a great work ethic. I am extremely fortunate to have had great influences in my life including my Bradford High School Basketball Coach Ronnie Johnson and my Arkansas Tech University college Coach Jim Yeager.”

Superintendent Dr. Tony Thurman said, “Coach Crowder has been a tremendous asset to the Panther family. I admire Coach Crowder for her commitment, dedication and love for her players. We wish Coach Crowder a happy retirement and congratulate her on a long and successful career.”

Crowder is excited to enjoy retirement with her husband. They plan to spend more time with their son, Colton, who is a video coordinator with the UALR Women’s Basketball program.

“It is going to be tough to step away from the basketball court but after nearly four decades, it is time,” she said. “Throughout my career, I could not have asked for better staff or administrators. They always supported our program and players. What I am most proud of is that I was able to play a part in helping every one of my athletes further their education. I will miss the game and my kids, but I will always be cheering on the Lady Panthers.”