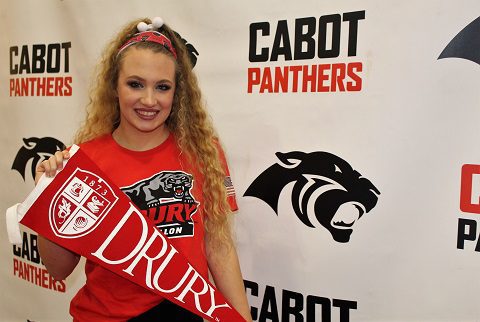 Before she was a triathlete, Cabot senior Melanie Abbott was a 10-year-old girl staring anxiously into a pool of water.


“When I was younger, my family made it a priority for me to become water safe,” Abbott said. “I didn’t know how to swim, but I loved being in the water. Even though I was probably the worst swimmer in my swim lessons, I enjoyed learning and was begging my family to go to practice. Soon after, my parents signed me up for the swim team, and by age 11, I was swimming competitively.”


Before she was a triathlete, Abbott was a 14-year-old girl admiring her father’s initiative to stay in shape.


“My dad was going out and running in the neighborhood for exercise,” Abbott said. “One afternoon, I decided that I would go with him.

Being able to do that together was special for me. My passion for running grew just as it did for swimming. Shortly after, I started running cross country and track and field for Cabot Junior High School. Cabot offered a daily class period where I could run for an hour each day, be coached and run with others my age — I was sold. My competitive nature and the encouragement from my coaches allowed running to take off for me.”


Abbott’s love for running quickly took off. In eighth grade, she won the mile run at the conference meet. As a freshman, however, the strain on her body from swimming and running began to take its toll.


“I began getting stress fractures for overusing my body,” Abbott said. “I had to make the decision to quit running and focus solely on swimming so that I could heal. Knowing when you’re injured and you can’t do what you love, it’s frustrating, but I was determined to find a way to incorporate running into my life at a competitive level.”


Before she was a triathlete, Abbott was a high school sophomore with both a passionate dream and a daunting challenge.


“In 10th grade, I was still swimming for Cabot High School, but I missed running competitively. I started researching and discovered triathlons, where I could swim, run and bike competitively. However, the biggest problem was that I didn’t own the bike I needed to begin my training.”


A road bike for Abbott would cost thousands of dollars — no easy task for a 15-year-old high school student.


“My parents were extremely supportive, but coming up with that kind of money for something I hadn’t done before was difficult,” Abbott said. “I started working as a lifeguard and teaching swim lessons at Cabot so that I could save money to buy a bike. It took a lot of time and hard work, but I was finally able to purchase a bike at the end of my 10th grade year.”


Mission accomplished. However, Abbott’s biggest challenge through her journey was yet to come — finding triathlon success through self-coaching.


“Once I had my bike and started training for triathlons, my newest obstacle was not having a coach or a team to let me know how I was doing in my training,” Abbott said. “I relied heavily on figuring things out on my own. It was difficult to find information online because everything was tailored toward middle-aged adults — your typical triathletes. For me, I just had to try new things to see what worked. I came up with my own workouts and training combinations and worked to a point where I thought I could excel in competitions.”


After years of gaining the confidence, skillsets and equipment to reach her goals, Abbott entered her first triathlon when she was 15.


“My first triathlon was a great experience,” Abbott said. “I was nowhere near getting a medal or winning, but I learned a lot about what the other kids my age were doing and how the racing aspect worked, and it only made me want more.”


After a meaningful first run, Abbott gathered what she learned from her first experience and turned the tables when she entered her next competitions.


“My next couple of triathlons were in northwest Arkansas, and I won my age group in both of them,” Abbott said. “To go from the beginning of my first triathlon to winning my age group was a vast improvement for me. I attribute my results in those races to having such a strong swim background. I was able to get ahead in the swimming portion of the event and did enough in the cycling and running portions to stay ahead to win.”


After getting her first wins under her belt, Abbott didn’t stop there. In 2017, the triathlete won her age group yet again in races in Arkadelphia, Bryant, Eureka Springs and Mountain Home and found a way to reach new heights during her journey.


“The more I raced, the better I became,” Abbott said. “It got to the point where I wasn’t just winning my age group anymore, but I was the top female finisher and I was even placing high among the men, too.”


After just two years into the sport, Abbott was already making waves that would extend beyond the 501. In November, Abbott became the first-ever women’s triathlon scholar in Arkansas, signing with Drury University in Springfield, Mo.


“When I was deciding on colleges, I knew that my decision would come down to academics,” Abbott said. “I knew that I wanted to find a school that would challenge me academically, and Drury was the perfect fit. As someone who wants to major in journalism, Drury has its own journalism department with many opportunities to get into broadcast and print.


“Athletically, my goals align with the goals of my future coaching staff. Drury’s coaches were looking for athletes who were willing to put in the work to propel the program into one of the top three, nationally, and I saw that as an opportunity to improve the most. It went beyond who I was as an athlete, but also wanting to find people who could fill leadership roles and maintain the values and morals that Drury hopes to uphold.”


Before she becomes a Drury Panther, Abbott is already blazing the trail for future Cabot Panthers to follow in her footsteps.


“This year, I created a Triathlon Club at Cabot High School,” Abbott said. “I want to be able to help others who are interested in becoming triathletes so that they can have the connections to meet people and learn from them so that they don’t have to do it on their own. It’s a positive environment where athletes of all abilities can join and learn, and I hope that it paves the way for more students to become multi-sport athletes and triathletes.”


After all her hard work paid off, Abbott hopes that her journey will inspire others to achieve their dreams.


“I’m excited to share my story because I hope it will inspire more triathletes to compete in the high school and collegiate levels,” Abbott said.


“What I learned through all of this, however, is that when you let go of fear, you will accomplish great things and find a way to reach your goals. If you have the passion to do what you love, passion outweighs fear.”