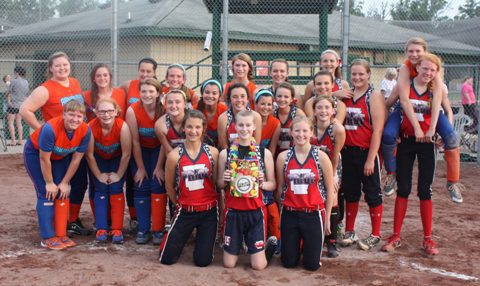 30 Jul Cabot player has a lot to celebrate


Cabot softball player Kaitlyn Campbell has a lot to celebrate.

Her team recently won its World Series competition in Florida, and this fall she will play for the Cabot High School Softball Team. And, her family recently made a trip to Hawaii thanks to the Make A Wish program.


And best of all, Kaitlyn continues to heal following a bout with cancer.


Kaitlyn, who will be a ninth-grader at the Cabot Freshman Academy, is a daughter of Jeff and Sheri Campbell. She has been battling cancer since she was diagnosed with Ewing’s sarcoma in March 2013.


Arkansas Pride, her close-knit softball team, has dedicated its season to Kaitlyn and offered support to her and her family. The team has members from several cities including Vilonia and Cabot.


According to Stephanie Hinsley, a family friend, Kaitlyn has been cleared to play and was able to play a little during the World Series tournament, where Arkansas Pride went undefeated.


Stephanie said Kaitlyn continues in rehab to regain her strength but is doing more activities typical of a teenager. “Everything is going good,” she said. “She’s just doing great.”


Kaitlyn has played softball since she was about 6 and has competed the last two years with Arkansas Pride, although the “core group has been together for a long time.”


For Kaitlyn, the most enjoyable aspect of playing softball is the friendship she enjoys with her teammates. “I like being able to play with some of my closest friends,” she said. “It’s good to have somebody there for you.”