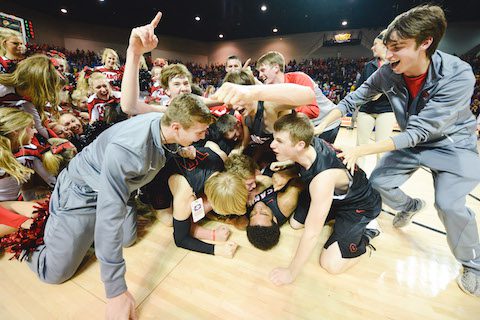 
Out of the 14 Arkansas high school basketball championship games last week, six of the champions came from the 501: Nemo Vista (1A girls), Baptist Prep (4A boys), Riverview (4A girls), Little Rock Parkview (6A boys), Cabot (7A boys) and North Little Rock (7A girls).

Southerland and the Cabot Panthers defeated Bentonville and the vaunted Malik Monk, 59-49. Cabot’s defense held Monk, a McDonald’s All American, 0-for-10 on 3-pointers.


“We were in better shape,” Southerland said. “At the end of the game they wore down and we kept going. We played some strong defense, which helped with the win, and we caught fire in the second half. With our lock down defense we were making Monk work for his outside shot.”


“The thing I’ll miss the most about playing for Cabot is getting to play with my teammates. It’s been great getting to know them and play basketball with them. I will also miss my coaches. Coach [Jerry] Bridges and Coach [Nathan] Brown have helped me so much these past few years. I will miss having them as my coaches.”


The other 501 Basketball Team honoree to win a state championship was Nemo Vista’s Jacie Andrews. Nemo Vista defeated Kirby, 47-36, after trailing by seven points at halftime.


“We have faced so much adversity throughout the past three years, and we know how to claw our way back into a game,” Andrews said. “With that being said, the third quarter was definitely the turning point. We came out on fire, hit a few big shots to tie it up and ended up going on a 14-2 run that put us in the lead.


“One of the major keys to win was to take care of the ball, and we handled Kirby’s press very well. In the second half, we made an adjustment on defense and were able to get out to the shooters. The bottom girls worked hard as well to stop Kirby’s inside game. We stopped them on the defensive end, and we all did our jobs on offense.”


The win marked the program and the Andrews’ third-straight championship.


“I’m still on cloud nine, honestly,” Andrews said. “The fact that my team and I just won a third-consecutive state championship is incomprehensible, but it’s also bittersweet. My team means the world to me. Those girls gave me the ability to be a part of something bigger than myself, and I will always love each and every one of them. To put it simply, I feel blessed beyond measure.


“Our team is a family. My teammates and I are like sisters, and the bonds we’ve built can’t be broken. I believe our relationships, great fan base and strong faith are the backbone to our success.”


Andrews’ high school basketball career is over, but the championships, relationships and memories will endure.


“I’ll miss the hard workouts and runs in 90-degree weather,” Andrews said. “I’ll miss the team sleepovers; I’ll miss the pre-game routine, but most of all, I’ll miss my girls. They’re my best friends, my sisters and my motivation. They have been there to push me throughout the past several years whether it be in my faith, in a sport or in life in general. It has been such a privilege and blessing to form bonds with each of my teammates, and I hope to keep those bonds strong even after high school.”

Two other 501 Basketball Team members made it to their respective state championship games. Conway’s Alexis Tolefree and the Lady Cats fell in the 7A girls final to North Little Rock, 75-65. It was the third-straight 7A championship appearance for Tolefree in Conway. The senior won a championship in 2014 as a sophomore. She finishes her high school basketball career as Conway’s record holder in points for a single season and a career. Tolefree has signed to play basketball at Central Arkansas.

De’Shawn Williams and the Maumelle Hornets fell to Forrest City in the 5A boys final, 91-85. Williams plans to continue his basketball career on the collegiate level at East Carolina University.