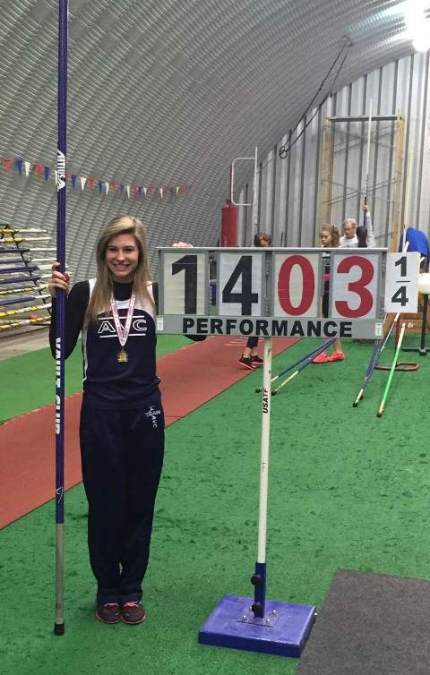 
Weeks is the first Gatorade Arkansas Girls Track & Field Athlete of the Year to be chosen from Cabot High School.


The 5-foot-6 senior pole vaulter, hurdler, jumper and sprinter won three individual state championships this spring, leading the Panthers to a second-place finish as a team at the Class 7A state meet. Weeks won the pole vault with a clearance of 14 feet, the long jump by soaring 17 feet, 7.25 inches and the 100-meter high hurdles with a time of 14.97 seconds. She also won two individual titles at the Meet of Champions, capturing first-place in the 400-meter dash in 56.96 and all-class gold in the pole vault with a clearance of 14 feet, 2 inches, which ranked as the nation’s No. 1 performance among prep competitors in 2015.


“Lexi Weeks is truly an amazing girl,” said Brett Unger, head coach at Har-Ber High. “She is the national leader in the pole vault but what’s more impressive is all the events she competed in and how she rallied her team to a runner-up finish at the state meet. She is a true class act and a brilliant girl.”

Weeks has signed a National Letter of Intent to compete in track and field on an athletic scholarship at the University of Arkansas this fall.


The Gatorade Player of the Year program annually recognizes one winner in the District of Columbia and each of the 50 states that sanction high school football, girls volleyball, boys and girls cross country, boys and girls basketball, boys and girls soccer, baseball, softball, and boys and girls track and field, and awards one National Player of the Year in each sport. The selection process is administered by the Gatorade high school sports leadership team in partnership with USA TODAY High School Sports, which work with top sport-specific experts and a media advisory board of accomplished, veteran prep sports journalists to determine the state winners in each sport.