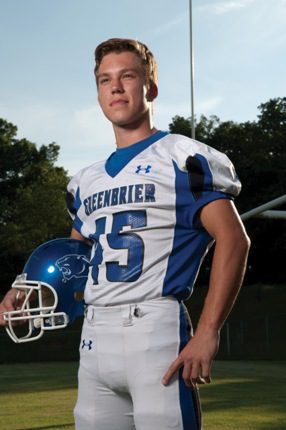 06 Nov Buchanan 'thankful' to be a Panther

With Buchanan’s dad, Alan Buchanan, coaching at Star City and Van Buren, Jake was never in one place for long. When his dad was hired as Greenbrier’s defensive coordinator in 2008, however, Jake was finally able to settle in as a Greenbrier Panther.


“It’s great here in Greenbrier,” Buchanan said. “The atmosphere here on Friday nights is unbelievable. So many people come out to support us, and I’m just thankful to be a part of this community.”


Buchanan was nominated by Coach Randy Tribble and selected for this year’s 501 Football Team.


“Jake plays hard, is very coachable and has a great attitude,” Tribble said. “He is a two-way player and leads by great example.”


Changing schools was hard for Buchanan not only due to learning new playbooks, but also trying to find friends as well.


“Trying to find a new social group and the right people to hang around with was hard,” Buchanan said. “How you live off the field affects how you play on the field. I try to make sure my performance stays how I want it to be on the field.”


Knocked out of the second round of the playoffs last year, the Panthers are in the hunt for another playoff run.

Greenbrier closes the regular season with one of the biggest high school rivalries statewide: a showdown with the Vilonia Eagles. Greenbrier 3-6 (2-4) is in a "win-and-in" situation. If the Panthers beat the Eagles, they have a chance to take the fourth and final playoff spot in the 5A West.

“It’s always a close game, no matter which team is better,” Buchanan said. “The people here know there is a huge rivalry. People grow up here not liking Vilonia very much, and now they get to play it out on the field. Both sides play their toughest game in this one, and I expect this year to be a tough battle again.”


In addition to his senior leadership on the field, Buchanan holds a 3.97 GPA in the classroom and serves the 501 through his youth group at Robinson & Center Church of Christ in Conway.


“We do a lot of service projects in Faulkner County,” Buchanan said. “We also like to go out and do random acts of kindness for the community.”


The future is bright for Buchanan, who hopes to continue his football career at the collegiate level.