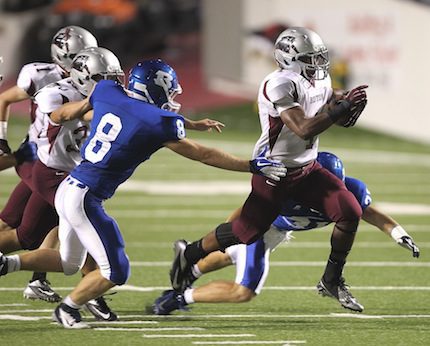 
Bryant experienced very few growing pains in its first season in the 7A/6A South conference last fall. After dropping the 2012 opener, 21-3, to Conway, the Hornets won seven of nine games, finishing third in the conference, but falling just short to Cabot in the first round of the playoffs, 28-21.


Speedy junior Brenden Young shifts from defense to running back and should receive the bulk of the team’s carries. Other options in the backfield include senior Jarron Wade and junior Kylon Boyle.


All-conference receiver Brushawn Hunter returns after the senior gained more than 700 yards through the air and six touchdowns. Seniors Devonte Howard, Austin Vail and Jacob Irby round out a very talented receiving unit.


With their size and strength, the Hornets will boast one of the most-feared offensive lines in the conference, with the likes of seniors Jordan Jones, Seth Hoffmans, Jacob Ward, Josh Earls and Kurt Calley.


Hard-nosed defensive back Davis Nossaman rarely lets anyone past him in the secondary. The senior was named to the 501 Football Team this fall.


“[Davis is] a heady player that reads quickly and often plays above his ability level,” Coach Paul Calley said. “He’s very goal oriented and always focused. His teammates know how strong his desire to win is and that he plays with reckless abandon.”

Classification: Senior
Position: DB
On the field: He is a leader.A heady player that reads quickly and often plays above his ability level.
Off the field: He’s a leader off the field also, being vice president of the student spirit group, the Swarm, and Youth Alive. He will be president this year. Respectful and hard working with a great sense of humor.
Community work: He volunteered to coach a Bryant City League basketball team last summer that took up a lot of his time. He helped put on an inner city soccer camp for the Knollwood Community. Does lots of inner city mission work with Crosswalk Church of Christ in Little Rock.
Sportsmanship: Positive attitude; motivator; unselfish. His ability to lead by example, he’s always positive and a great role model. He’s very goal oriented and always focused.Teammates know how strong his desire to win is and that he plays with reckless abandon.
Classroom: Davis is willing to step to the forefront and ask the tough questions when representing the student body. He is a leader in the classroom with over a 4.0 GPA, and we are anticipating him being named a National Merit Finalist.