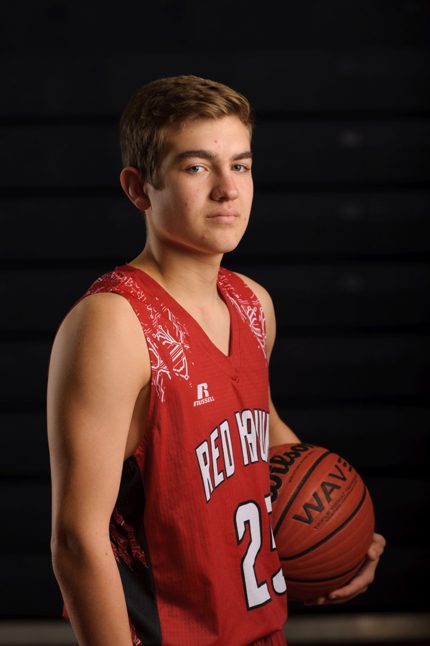 
It’s the game that Nemo Vista has had circled on its schedule for weeks — an opportunity to get back at one of its biggest conference rivals — a rematch against the Mount Vernon-Enola Warhawks. With both teams fighting for second place in the competitive 1A 5 North, the stakes are higher than ever in 2016.


“Earlier in the season, they got by us, 55-43,” Nemo Vista junior forward Justin Brown said. “We want to get back at them. We didn’t have a good night that night and they played great. If we have good ball movement, hit our shots and play good defense, then we can stop them.”


Brown was selected to this year’s 501 Basketball Team — 35 players representing the best the 501 has to offer both on and off the court. He was nominated by his head coach, Len Harris.


“Justin is a hard worker,” Harris wrote in his nomination. “He is very coachable and a great teammate. As one of our team captains, a lot of what we do will be built around his skills. He has a pleasant personality, is very respectful and well-mannered.”


Brown takes pride in being a team captain. The junior sees the honor as a way to give back to the team that was there for him in a time of great need.


“During the offseason, I contracted viral meningitis,” Brown said. “It was a scary time for me, but my team was right there with me to help get me through it. When the team found out that I was going to be airlifted to the hospital, some of my team members were there waiting for me before the helicopter even got there. They all took turns visiting me. They wanted me to get better so I could play basketball with them again. Today, I’m back on the court because of my doctors and the great support of my team and everyone around me. I’m very thankful for them.”


On the court, the Red Hawks (12-11, 5-5) are committed to making a deep run in the upcoming district tournament — something that is an important personal goal for Brown this season.


“I’ll always remember winning the district tournament as a sophomore,” Brown said. “That year, one of our teammates, Cameron Chancellor, passed away, and it was a very hard time for our entire school. Even though we were sad, we stuck together and became even closer as a team and won the district tournament. I really want to get back there and make some noise this year.


“Our Coach believes that we can go all the way. He’s confident in us. If we can improve our teamwork, then I think we can do it, too.”


Off the court, Brown is a member of FCA, FFA and the baseball team at Nemo Vista. In the community, he volunteers his time teaching the youth at Kilgore Free Will Baptist Church.


“Justin is a straight-A student and is always helping others,” Harris wrote. “He is a tremendous young man with a very bright future in and out of basketball.”


In his free time, the junior enjoys spending time with his family and hunting, fishing and talking basketball with his teammates.


“I have great chemistry with the whole team,” Brown said. “Before each game, we’ll go over to someone’s house to strategize about the game beforehand. We’re all very close. I am thankful to have so many friends and family who support me. Most of all, God helps give me athleticism and I’m very thankful for that. I love Him and I wouldn’t be here today if it weren’t for Him.”