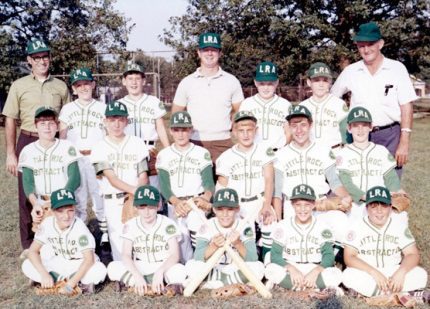 
Its most famous alumnus will return to Little Rock’s Lamar Porter Field on Saturday, June 15, to help the landmark celebrate its 77th birthday.

Third baseman Brooks Robinson, who went on from his native Little Rock to the Major League Baseball Hall of Fame after a 23-year career with the Baltimore Orioles, is the featured guest for a birthday party that will serve as a kickoff for a multi-million dollar fundraising effort to restore the facilities and grounds of the Lamar Porter Complex. The complex also includes the Billy Mitchell Boys and Girls Club, a yet-to-be named multipurpose field (in 1938 the first place softball was ever played in Arkansas), a practice field, Woodruff Community Garden and a playground and recreational area.


“Brooks has been back several times to help out through the years,” said Holt McConnell, a member of the Lamar Porter Complex Revitalization Committee. “He loves coming home, and he is passionate about Lamar Porter Field. It’s where he grew up; he grew up in that neighborhood; he went to Woodruff School.


“And that park was the hub of kid life in that neighborhood.”


Robinson, who was inducted into the MLB Hall of Fame in 1983, is the honorary chair of the committee, which also includes Lamar Porter, whose grandfather, Jim S. Porter Sr., was the brother of the park’s namesake. Jay Rogers, president of Sportstop, is the committee chair; Ray Imbro, owner of Party Time Rentals, is the spokesperson.

Lamar Porter Field, located at the corner of Seventh and Johnson streets (3200 West Seventh St.) in the Stifft Station neighborhood, is the oldest actively used baseball stadium in the state. It is a Works Progress Administration facility completed in 1937.


"We have a large number of folks from the Baltimore area getting on planes and coming. It’s because Brooks is a beloved figure and a wonderful man, and if he cares so much about something, other people want to see why."


Gates will open at 4 p.m. for the birthday festivities. The program will run from 5:30-7:30. Admission is $10; tickets are available at Sportstop at 10720 Rodney Parham Road. Each ticket is good for admission, a hot dog, soft drink and popcorn. Robinson will also be available to sign autographs. All proceeds will benefit the campaign to restore the Lamar Porter Field and complex.


The 10-acre site was given to what was then the Little Rock Boys Club in memory of Lamar Porter, a product of public schools in Little Rock and Sewanee Military Academy. He was a junior at Washington and Lee University in Virginia when he was killed in an automobile accident May 12, 1934. On the first anniversary of his death, his family donated the land and contributed money for construction of the facility that would provide green space and recreation for Little Rock’s youth.

According to lamarportercomplex.com, Lamar Porter Field and the multipurpose field are home to RBI (Reviving Baseball in the Inner-city), an official program of Major League Baseball. Both Little Rock Catholic and Episcopal Collegiate use Lamar Porter as their home field. In 1984, portions of "A Soldier’s Story," starring Denzel Washington, were filmed there. The field was placed on the National Register of Historic Places on Dec. 6, 1990.


The revitalization committee was established by the Boys and Girls Club of Central Arkansas in conjunction with the Lamar Porter Trustees. The group’s mission, according to the website, is to unite the neighborhood, present and former players and patrons, government entities, private organizations and caring individuals to raise funds necessary to return the complex to its status as a first-class recreational facility for youth and their families all across Arkansas.


The goals include a complete restoration of the grounds, development of a sustainability plan by the establishment of an endowment to maintain the complex cost-effectively and to ensure that the property remains faithful to the intent of the Porter family when they donated the property.


Renovation cost is estimated to be $4.5 million. McConnell said with possibilities of matching funds, the committee hoped to get there quickly.


"We hope it’s one year," he said. "We figure if we can get the message out, hopefully we can raise $2.5 million and get a match."


There is limited seating for the birthday event. The stadium holds 1,500, and McConnell said tickets were going quickly.


For more information, visit lamarportercomplex.com or call McConnell at 501. 951.4466.