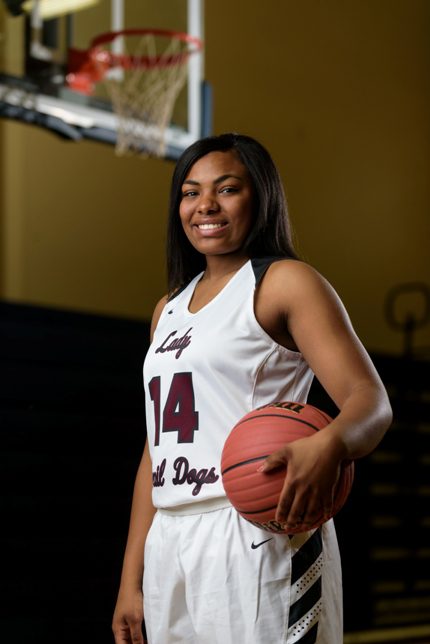 
February is crunch time in high school basketball. For Kaliyah Brooks and the Morrilton Lady Devil Dogs, how they finish down the stretch in February will determine the outcome of their season.


At 8-14 overall, Morrilton is currently on the outside looking in for a state playoff spot, but with a strong finish and a little luck, the Lady Devil Dogs could still play their way in.


“We are a very young team and have a lot of growing to do,” Brooks said. “But we’ve still managed to overcome that and play the game.”


Brooks was selected to this year’s 501 Basketball Team — 34 players representing the best the 501 has to offer both on and off the court. The team is sponsored by First Security Bank and First Service Bank. She was nominated by her head coach, Carin McNabb.


“Kaliyah has such a positive attitude and is very coachable,” McNabb wrote in her nomination. “She’s a great student. Kaliyah is always ready to help a teammate or classmate out. She has a great personality. Everyone likes and respects her and listens to her when she speaks.”


Brooks has been playing basketball “ever since I can remember” after her mother signed her up when she was young. “I fell in love with the game,” she said.


Basketball has been a labor of love for Brooks as it has brought both highs and lows for the senior forward over her high school playing days.


“I’ve had to overcome losing my confidence and trying to get it back,” she said. “I’ve struggled at times with not believing in myself and thinking I’m too tired to push through. This season, I’ve been focused on growing and learning from my own mistakes, being a better teammate and senior leader, focusing on what’s important and becoming more vocal on the court.


“We’ve come together as a team. We’re learning to play well with each other. We are focused on keeping our chemistry as good as it is now, having fun while also getting the job done and making it further than we did last year.”


After a successful freshman campaign, Brooks missed her entire sophomore year due to injury.


“Kaliyah is the poster child for the way to handle adversity in your life,” McNabb said. “She had to sit out her sophomore season, but never missed a practice or game and was a great team motivator on the bench. Kaliyah had to play out of position last year because of our lack of size. She did the best she could and helped us in the post.


“This year, she’s been able to go back and play where she is best and most comfortable. She’s back to where she was as a ninth-grader. She’s confident, strong and shooting really well.”


Kaliyah frequently gives back to the youth in the Morrilton community by volunteering with fifth grade peewee basketball. After graduation in May, Brooks plans to pursue a career in the medical field by attending nursing school.